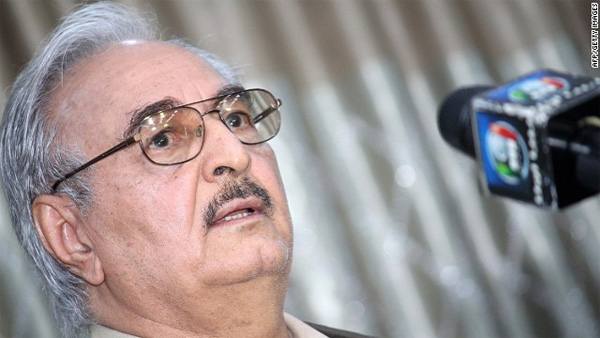 Tripoli, Libya (CNN) — With new armed threat breathing down its neck, Libya’s discordant government made a snap announcement on Tuesday — elections will be held in just over a month.

The move was intended to stem a spike in violence that has prompted the U.S. military to ramp up preparations for a possible emergency evacuation of the U.S. Embassy in Tripoli.

Just two days prior, armed men claiming allegiance to a newly formed movement called the Libyan National Army stormed parliament and announced they had suspended it.

The declared goal of the LNA is to eradicate Islamist militants from Libya, including Ansar al-Sharia — the group blamed for the September 11, 2012 deadly attack on the U.S. consulate in Benghazi.

Nearly 80 people have died in less than a week in battles initiated in the name of the LNA.

But the effectiveness of any solution involving an election is sure to find doubters in Libya. Only 1.3 million out of an estimated 3.4 million eligible voters are registered to vote, according to Libya’s elections commission.

During the country’s last election in February, only 14% of eligible voters participated, and boycotts and violence spoiled polls in some cities.

The budding military alliance is a reflection of the political deadlock in Libya, which has increasingly pitted Islamists against those who oppose them.

Their squabbles have paralyzed government, hindered elections, foiled security efforts and cost the interim administration its legitimacy in the eyes of many Libyans.

After the raid on parliament — known as the General National Congress — its speaker, an Islamist, called upon a large Islamist militia to take up the fight.

Gunfire from the skirmishes that followed crackled through Tripoli for nearly two days. Four people died and 90 were wounded, health officials said.

Still, it was much less bloody than a battle in Benghazi last week led by retired Gen. Khalifa Haftar, who first declared the existence of the LNA.

Haftar’s men launched a land and air offensive against the Benghazi bases of Ansar al-Sharia and Islamist groups with ties the government in Tripoli.

Haftar was once a general in the Libyan army under dictator Moammar Gadhafi but had a falling out with him and emigrated to the United States, where he lived for almost 20 years. He returned in 2011 to participate in the revolution to overthrow Gadhafi.

He has criticized the government for not getting a grip on violence, particularly from Islamist groups, and has called for the government in Tripoli to be removed from power.

He has named his campaign against Islamist militias Operation Dignity.

Militants have attacked foreign diplomats, Westerners, Libyan journalists, activists and judges, but they have aimed most of their violence at government security forces with nearly daily bombings, kidnappings and assassinations.

Many of those who have declared alliance with Haftar come from the ranks of Libya’s army, including well-respected officers, and they have been on war footing with Islamist militias already. Members of secular militias have also joined the LNA.

The central government has vehemently objected to Haftar’s offensive, but the retired officer, who fought to overthrow former dictator Moammar Gadhafi, vowed to not stop until Libya is “purged” of extremists groups.

It’s unclear whether there was any coordination of the attacks in Tripoli and Benghazi by forces claiming loyalty to the Libyan National Army. But their common enemy is clear: Libya’s Islamists.

As violence spread early this week, the U.S. military doubled the number of aircraft standing by in Italy if needed to evacuate the U.S. Embassy in Tripoli.

About 250 Marines plus seven Ospreys and three C-130 planes were in place, just in case, a Pentagon spokesman said.

No decision has been made to close the embassy, he said, but one of the lessons of the Benghazi incident that killed the U.S. ambassador and three more U.S. citizens was the “need to be more agile.”