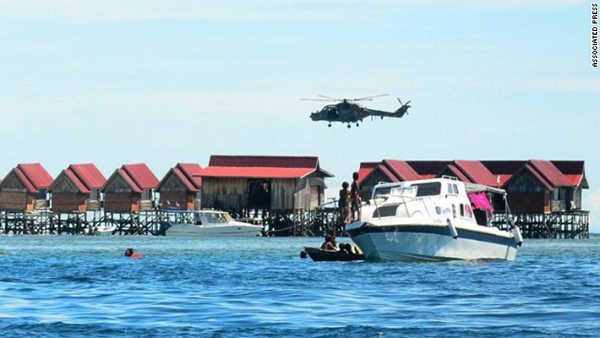 Kuala Lumpur, Malaysia (CNN) — Armed men fatally shot a Malaysian police officer and abducted another at a diving resort on the island of Borneo, according to Malaysian authorities.

The masked attackers fled by boat with one of the police officers, 26-year-old Constable Zakiah Aliep, after a gunfight that killed another, Corporal Abdul Rajah Jamuan, 32.

The two policemen were stationed at the resort following a series of kidnappings which began in Sabah last year.

Harun said it was unclear who was responsible for the attack, but the vessel was seen traveling toward the southern Philippines, which is a notorious safe haven for Filipino separatists.

With pristine diving spots that are considered some of the best in the world, Sabah is a popular destination for tourists but the region remains vulnerable to attacks by insurgents from the southern Philippines.

This is the fourth incident involving suspected Filipino gunmen on the island this year.

In April, a Chinese tourist and a Filipina worker were kidnapped from a diving resort off Semporna. A month later, a Chinese fish farm company manager was abducted from Batik Island near Lahad Datu.

All three have been released following negotiations with Malaysian and Filipino security forces.

Another Chinese citizen and a Malaysian worker, who were kidnapped from a fish farm near Kunak on June 23, remain missing.

Police believe the gunmen responsible for Saturday’s incident avoided detection by rowing a boat to the resort before springing the surprise attack from the rear of the complex, a spokesperson for the Malaysian police, Asmawati Ahmad, confirmed Monday.

Malaysia’s prime minister Najib Razak has expressed his condolences to the family of the officer killed in the ambush, and promised authorities would try their best “to look for and rescue” the missing constable.

The Mabul Water Bungalow Resort was operating as usual Monday, a spokesperson for the hotel told CNN.

Police investigations into the attack are ongoing, Harun from the Eastern Sabah Security Command said.