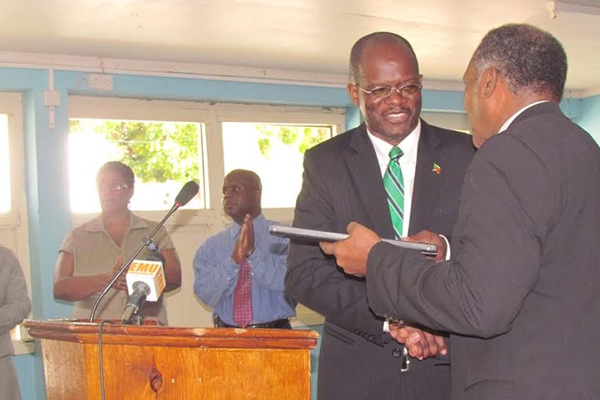 Brown Hill, Nevis (CUOPM) — Minister of Foreign Affairs, Homeland Security, Immigration, Labour, Justice and Legal Affairs the Hon. Patrice Nisbett says his presence in the Federal Government of St. Kitts and Nevis gives him the ability to secure numerous benefits for the people of Nevis.

Although Nevis has its own local government – the CCM-led Nevis Island Administration, Mr. Nisbett, says he continues to seek Federal Government assistance in several areas for the people of Nevis, whom he represents.

“Whilst I am not the Minister of Education and/or the Minister of Information Technology, my presence in the Federal Cabinet has ensured that all the students attending secondary schools in Nevis continue to benefit from the one to one lap top programme. No child in Nevis shall be left out,” said Minister Nisbett at a Federal Government-sponsored “Conversations For Progress” at the Brown Hill Basket Ball Court as he reported on his several achievements and accomplishments last week.

Last year the high school children in Nevis also benefitted from a similar Federal Government financed project when Laptops were distributed to the high school students. The Hon. Patrice Nisbett also presented a laptop to the Premier of Nevis the Hon. Vance Amory .

Pointing out that he takes his responsibilities in the Federal Cabinet, seriously, Minister Nisbett, the Parliamentary Representative for Nevis 11, disclosed to the enthusiastic crowd that he has embarked on a project which is ongoing, to renovate the facilities being used by fire officers deployed on the island of Nevis.

“We are expending just under EC$130,000 to renovate the facilities in Charlestown. In the coming weeks, a brand new fire truck will be commissioned for use here on Nevis. Again, the work of the Federal Government, delivering through me, for the people of Nevis. We are preparing to train all the officers for operation of the truck when it us delivered to the people of Nevis,” said Minister Nisbett, the first Nevisian to address the United Nations General Assembly.