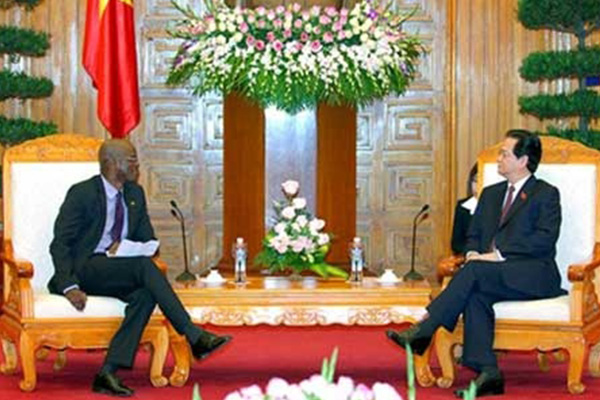 (CUOPM) – St. Kitts and Nevis’ Minister of Foreign Affairs, the Hon. Patrice Nisbett has spotlighted the Federation’s foreign policy of friendship, peace and cooperation during an official visit to Vietnam.

In his meeting with the Vietnamese Prime Minister, His Excellency Nguyen Tan Dung, the St. Kitts and Nevis official also highlighted the thrust of his government’s guidelines for expanding ties with Southeast Asian nations, including Vietnam, especially in the fields of trade, agriculture and tourism.

At a reception for Foreign Minister Nisbett in Ha Noi on Wednesday, Dung praised his visit, which takes place following the establishment of diplomatic ties on November 1.

Minister Nisbett noted that the Government of St. Kitts and Nevis will seek to expand both its friendship and cooperation with Viet Nam.

Nisbett is on an official visit from November 18-21 at the invitation of Vietnam’s Deputy Prime Minister and Foreign Minister, His Excellency Pham Binh Minh.

At the talks between the two Foreign Ministers updated each other about current situations in their countries and discussed steps they might take to increase the levels of cooperation.

Minister Minh noted that he valued proposals offered by Mr. Nisbett, saying that both countries should encourage visits by various types of delegations and sign cooperation documents in order to lay a foundation for bilateral ties, particularly in economics, trade and investment.

Additionally, while discussing regional and global issues of mutual interest, the ministers agreed to work closely together during multilateral and global forums.