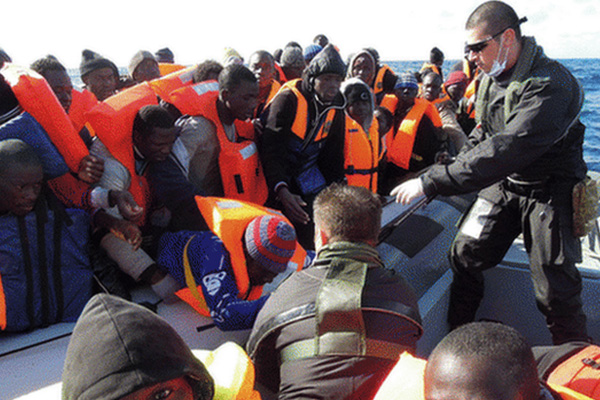 More than 1,100 migrants rescued off Italy in one day

(BBC) — Italy’s navy has rescued 1,123 people from inflatable boats in the space of 24 hours, as clandestine migration from North Africa reaches record levels.

The latest migrants were found in eight boats and a barge about 120 miles (222km) south-east of Lampedusa.

They included 47 women, four of them pregnant, and 50 children, all probably from sub-Saharan Africa, the navy said.

Meanwhile, at least seven migrants have drowned trying to reach the Spanish enclave of Ceuta in North Africa.

Local officials say the bodies of six men and a woman were found on a beach in neighbouring Morocco. The dead migrants had been part of a group of some 400 people who tried to enter Spanish territory on Thursday.

All of the victims were from sub-Saharan Africa, Spanish news agency Efe reports.

According to the government, last year saw an “incessant and massive influx of migrants” with a total of 42,925 arrivals by sea, or more than three times as many as in 2012.

The true number of migrants who died attempting the perilous crossing is unknown, but in October more than 400 people drowned in two shipwrecks near Lampedusa, the closest Italian territory to North Africa.

Wednesday saw better than usual weather conditions for the time of year.

Navy ships and helicopters began the rescue at 08:00 (07:00 GMT), continuing after darkness fell.

The migrants were put aboard an amphibious assault ship, the San Marco, and are due to arrive at the Sicilian port of Augusta on Friday morning.

Once in Italy, the migrants will be assessed to see if they have legitimate grounds for claiming asylum.

They have to satisfy the authorities that they are fleeing persecution and would face harm or even death if sent back to their country of origin.

Nearly three out of four asylum applications in EU states were rejected in 2012.

The number of deaths from the incident near Ceuta was expected to rise as more bodies were recovered from the sea.

A total of 400 clandestine migrants tried to enter the Spanish territory on Thursday morning, in the first attempt at a mass border crossing this year, Spain’s El Pais newspaper reports.

Those who drowned were among a group trying to reach a sea wall which separates Ceuta from Morocco, the paper says.

Others tried to breach the border on foot, in a beach area known as El Tarajal.

According to El Pais, the migrants were making “a desperate attempt to escape Moroccan authorities”.

None of them succeeded in reaching Ceuta, Efe reports.

The territory lies just 15km across the sea from the Spanish mainland. Together with its fellow Spanish enclave Melilla, further east along the coast, it represents the EU’s only land border with Africa, making Morocco a magnet for migrants seeking work or asylum in Europe.

On Sunday, the bodies of five people believed to have been African migrants were found in the Nador area of Morocco’s northern coast, near Melilla.