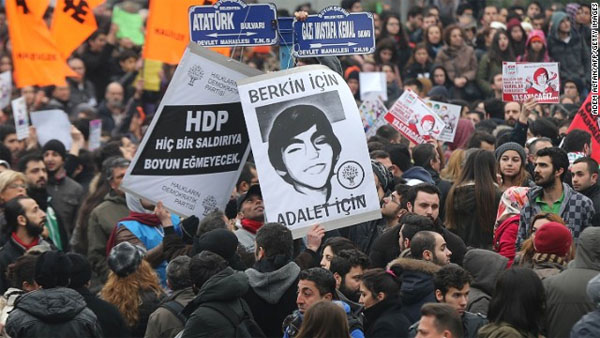 Istanbul (CNN) — Thousands of angry mourners gathered in a working-class Istanbul neighborhood Wednesday before the funeral of a 15-year-old boy whose death Tuesday triggered the worst street violence Turkey has seen in months.

Berkin Elvan’s death unleashed a wave of grief and rage against the Turkish government that sparked protests in cities across the country. Public messages of condolence issued by Turkey’s family affairs minister, as well as a sympathetic phone call from the Turkish President to the father of the boy did little to calm the outrage.

Elvan’s mother, Gulsum, has placed blame for the critical injury her son suffered last June squarely on the government and police.

The boy was 14 years old when he was last seen conscious stepping out of his home to buy bread for his family’s breakfast. His family says he was next seen 15 minutes later suffering from a horrendous head wound believed to have been inflicted by a tear gas canister fired by Turkish police. For the next nine months, the teenager lay in a coma, wasting away to a weight of just 16 kilograms (35 pounds).

On Wednesday, a major labor union called for a nationwide strike in honor of the dead boy.

Several of the main opposition political parties, which are in the middle of fierce campaigns ahead of nationwide municipal elections on March 30, announced they would not play music at rallies Wednesday.

Turkish television also aired footage of university students in a canteen, banging their silverware on tables in a show of support for the Elvan family. Some high school and university student groups are calling for a boycott of classes Wednesday.

“A small kid is murdered and the killers are still loose. This is us standing up for our kid brother,” said Bircan Birol, a 22-year-old member of the Student Collectives movement at Istanbul University.

“There are pictures of Berkin up everywhere, and today we say: ‘Our class is Berkin Elvan.’ ”

Recep Tayyip Erdogan, Turkey’s fiery Prime Minister has yet to mention the Elvan family in any of his daily campaign rallies. Erdogan is fighting hard to mobilize his ruling Justice and Development Party to continue its decade-long electoral winning streak in this month’s municipal elections.

However, Abdullah Gul, the man who holds the largely symbolic post of Turkish President, personally called the grieving family Monday.

“The family was very grateful for the call. They asked (for) Mr President’s help in finding out the security cam recordings of the incident, which, interestingly, couldn’t be found so far,” an official in Abdullah Gul’s office wrote CNN in an e-mail, on condition of anonymity because of Turkish protocol.

“And they asked the help of Mr President for calm during the funeral — and especially that the police shall not intervene. The President told them that he will talk to the governor especially to provide a smooth, calm and respectful funeral without any more bad scenes.”

The funeral is expected to take place in Istanbul’s Sisli district Wednesday afternoon.