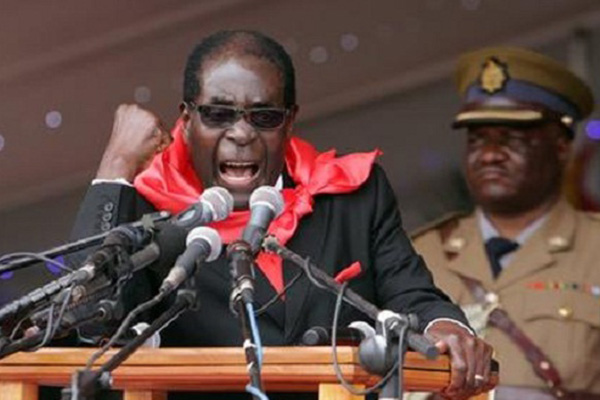 HARARE, Zimbabwe (AP) — Zimbabwe’s President Robert Mugabe, celebrating his 90th birthday before thousands of people at a soccer stadium Sunday, said he felt like a young boy and urged the nation to shun homosexuality.

“I feel as youthful and energetic as a boy of nine,” said Mugabe, at the event in Marondera, 75 kilometres (45 miles) east of Harare. More than 45,000 people gathered at the stadium, said organizers from Mugabe’s ZANU-PF party.

Mugabe gave his trademark clenched fist salute to the crowd, as he and his wife, Grace, stood at the back of a truck that drove around the stadium. Mugabe holds a giant birthday party in a different city each year, to take the festivities around the country.

He cut a 90-kilogram (200 pound) cake, one of five cakes served and 90 cows were butchered for the massive party, estimated to cost $1 million, according to state media.

Mugabe’s actual birthday was on February 21 but he was away in Singapore for a “cataract operation” on his left eye, according to his office. He returned to Zimbabwe on Saturday.

Mugabe claimed to be as “fit as a fiddle,” in an interview broadcast on state television, although at times he appears frail. On Sunday he looked robust, speaking to the crowd for an hour.

“We don’t accept homosexuality here. God made men and women so they can bear children,” Mugabe said.

In the birthday broadcast, Mugabe insisted he isn’t ready to retire.

“Why should it (retirement) be discussed when it is not due?” he said in an interview broadcast on state television. “The leadership still exists that runs the country. In other words I am still there … When the day comes and I retire … I do not want to leave my party in tatters. I want to leave it intact.”

Mugabe claimed he is the harbinger of good tidings for the nation, as the country has been soaked with rains around his birthday.

“My mother told me I was born during a year of plenty, in a year of a good harvest,” he said. “Now we see rains coming down as I turn 90, this is going to be a year of good harvests.”

Mugabe’s 90th birthday comes amid intense speculation about Zimbabwe’s future when his grip on power loosens.

In July Mugabe, who has ruled the nation for 33 years since 1980, won disputed elections for another five-year term that will take him to age 94.

In his early years in power, Mugabe expanded public education and health services that were the envy of the continent. But Zimbabwe’s economy went into meltdown in 2000 after Mugabe ordered the seizure of thousands of white-owned commercial farms, leading to the collapse of the agriculturally based economy, once the region’s breadbasket.

Mugabe has blamed the economic slump on Western economic sanctions, mostly travel and banking bans imposed on him personally and his closest associated to protest human and democratic rights violations.

In recent weeks the country has seen allegations of massive corruption in state enterprises at a time when many Zimbabweans are surviving on less than $2 a day.