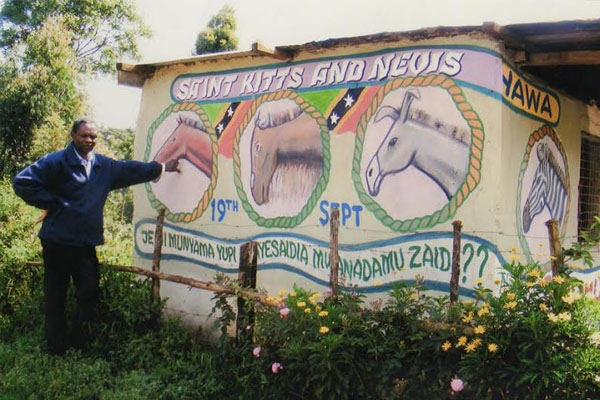 Basseterre, St. Kitts (CUOPM) — A public mural celebrating the Independence of the Federation of St. Kitts and Nevis has been unveiled following its completion in Kenya.

On 19th September, the Ngecha Artist Association in Kenya started to make a public mural that is now finished for the whole village to see.

The images depict some of Kenya’s most beautiful wildlife and domesticated animals. The Director, Mr. Fredrick Mbugua, believes that the mural will attract the attention of community members, who will then ask questions about St. Kitts and Nevis and, in effect, will learn more about the world around them.

Even though the two countries are very far away geographically, the artists are making efforts to bring people together.

This heartfelt event is part of “59 Days of Independence,” an interdisciplinary project that invites global citizens of all ages, professions, and nationalities to commemorate the independence days of 59 countries that once gained freedom from British colonization.

The most important part of the project is that we are each celebrating for countries other than our own. By doing this, we wish to create a vision of a world that believes in “freedom for all, not just for me.”

“As we celebrate each other’s independence days and acknowledge the current, ongoing, and complicated struggles for independence all over the world, we are denouncing oppression and colonization in all of its contemporary forms, including that which is based upon race, class, gender, sexuality, disability, religion, and nationality. Should you be interested in joining the project by celebrating for a country other than your own, send us a message and we’ll reply with more information,” said Mbugua.