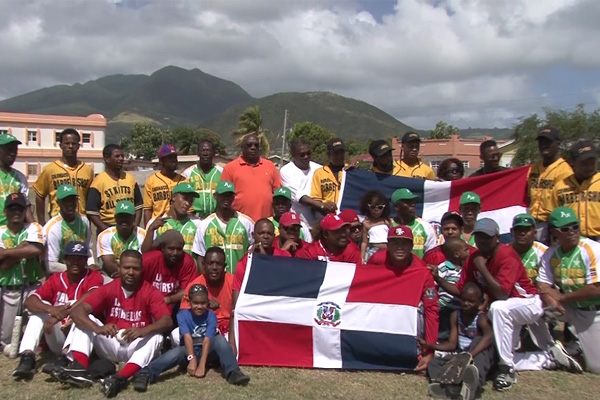 (ZIZ News)– Members of the local Dominican community showed the spirit of sportsmanship on Sunday [March 1] when they hosted a softball tournament at the Newtown Playfield.

The competition was held to mark the 173rd anniversary of the Dominican Republic’s independence.

Three teams participated in the tournament; one from St. Kitts and two from Nevis.

Captain of Las Estrellas De St. Kitts, Denny Dasent, said that such events are important for Dominicans who live in the Federation.

“It’s important for us to have the community of the Spanish together and to see if we can get some locals to be participating with us. Because some teams actually have locals playing with them and some people are interested in playing baseball and we’d like to introduce baseball to the island,” he said.

Parliamentary representative for Constituency #1, the Hon. Ian “Patches” Liburd, threw the first ball of the game.

He noted that Dominicans are an integral part of the population, particularly in East Basseterre.

“We are ensuring that we integrate them into our community as our brothers and sisters as they are. Many of our families went to the Dominican Republic for work so they are now returning and we want to ensure that they are an integral part of the community and what better way to do that, what other way to do that but through sports,” he said.

Prime Minister, Dr. the Hon. Timothy Harris was also on hand to greet the players.

He spoke of the Spanish community’s contribution to the local economy and pledged his government’s commitment to addressing their concerns.

“They are making a positive contribution to the retail sector and other areas of socio-economic life in St. Kitts and Nevis. We are for an integrated community and I’m therefore pleased as the Prime Minister and leader of the country to come and let them know their needs, their concerns, their aspirations by this Government of National Unity,” he said.