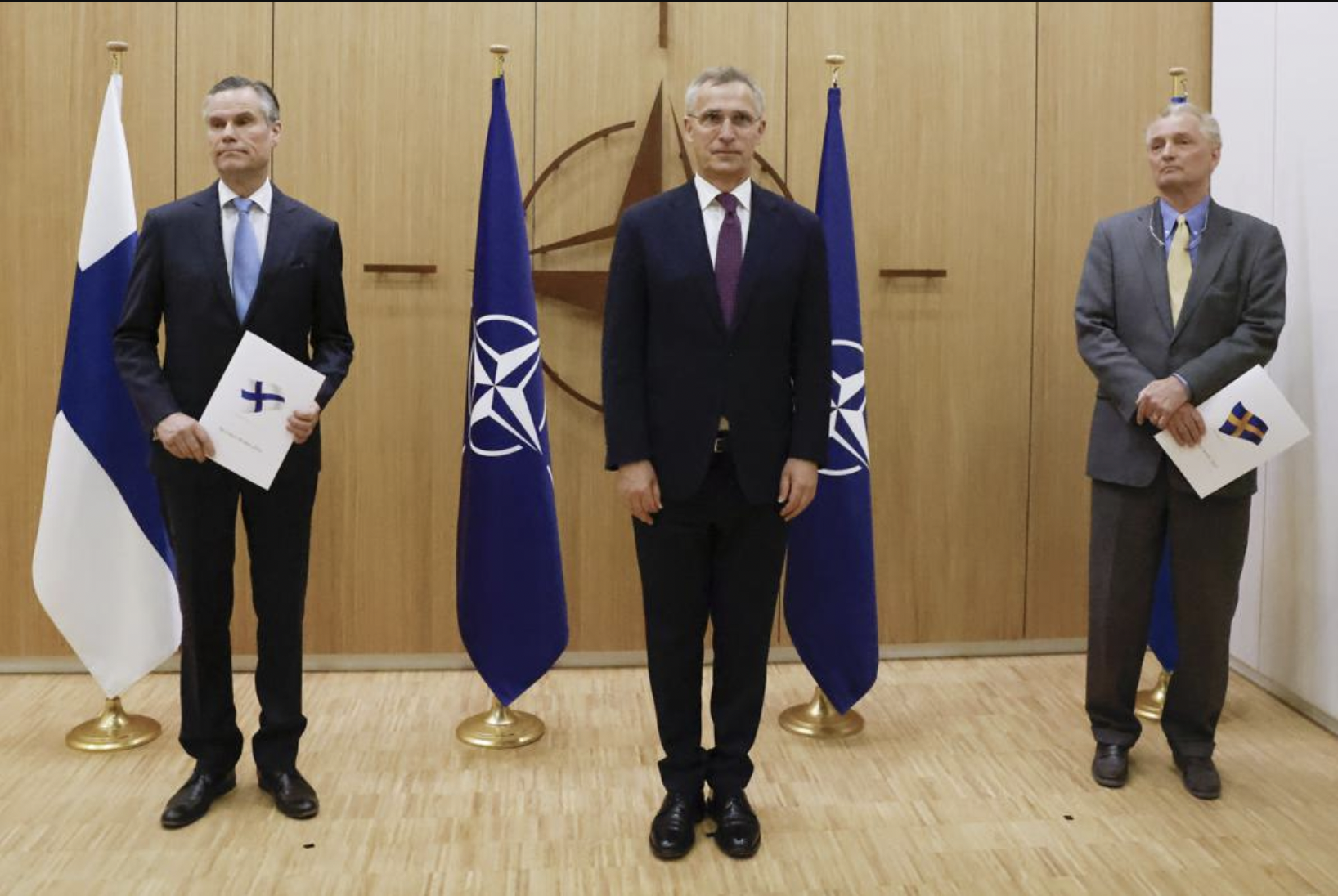 BRUSSELS (AP) — NATO Secretary-General Jens Stoltenberg said Wednesday that the military alliance stands ready to seize a historic moment and move quickly on allowing Finland and Sweden to join its ranks, after the two countries submitted their membership requests.

The official applications, handed over by Finland and Sweden’s ambassadors to NATO, set a security clock ticking. Russia, whose war on Ukraine spurred them to join the military organization, has warned that it wouldn’t welcome such a move and could respond.

“I warmly welcome the requests by Finland and Sweden to join NATO. You are our closest partners,“ Stoltenberg said. “All allies agree on the importance of NATO enlargement. We all agree that we must stand together, and we all agree that this is a historic moment which we must seize.”

“This is a good day at a critical moment for our security,” a beaming Stoltenberg said, as he stood alongside the two envoys, with NATO, Finnish and Swedish flags at their backs.

Russian President Vladimir Putin has demanded that the alliance stop expanding toward Russia’s borders, and several NATO allies, led by the United States and Britain, have signalled that they stand ready to provide security support to Finland and Sweden should the Kremlin try to provoke or destabilize them during the time it takes to become full members.

The countries will only benefit from NATO’s Article 5 security guarantee — the part of the alliance’s founding treaty that pledges that any attack on one member would be considered an attack on them all — once the membership ratification process is concluded, probably in a few months.

The move is one of the biggest geopolitical ramifications of the war and will rewrite Europe’s security map. British Prime Minister Boris Johnson welcomed it in a tweet and said that “Putin’s appalling ambitions have transformed the geopolitical contours of our continent.”

For now, though, the application must be weighed by the 30 member countries. That process is expected to take about two weeks, although Turkish President Recep Tayyip Erdogan has expressed reservations about Finland and Sweden joining.

If his objections are overcome, and accession talks go as well as expected, the two could become members soon. The process usually takes eight to 12 months, but NATO wants to move quickly given the threat from Russia hanging over the Nordic countries’ heads.

Canada, for example, says that it expects to ratify its accession protocol in just a few days — while in the Baltic region, Estonian Prime Minister Kaja Kallas tweeted: “I encourage a rapid accession process. We in Estonia will do our part fast.”

Stoltenberg said that NATO allies “are determined to work through all issues and reach rapid conclusions.”

The fact that the Nordic partners applied together means they won’t be losing time by having to ratify each other’s membership applications.

“That Sweden and Finland go hand in hand is a strength. Now the process of joining the talks continues,” Swedish Foreign Minister Ann Linde told the Swedish news agency TT.

It shouldn’t take long to win approval in the Baltic states of Estonia, Latvia and Lithuania. Their prime ministers issued a joint statement on Wednesday saying that they “fully endorse and warmly welcome the historic decisions” taken in Helsinki and Stockholm.

But Erdogan insisted Wednesday that Finland and Sweden must show more respect for Turkish sensitivities about terrorism. He refused to back down on his opposition to their membership in the alliance because of their alleged support for Kurdish militants.

He accuses the two countries of turning a blind eye to activities of the banned Kurdistan Workers Party, or PKK, even though the group is on the European Union’s anti-terror blacklist.

“You will not hand over terrorists to us, but you will ask us to allow you to join NATO. NATO is a security entity. It is a security agency. Therefore, we cannot say ‘yes’ to depriving this security organization of security,” he said in an address to ruling party lawmakers.

Still, Stoltenberg said that NATO allies “are determined to work through all issues and reach rapid conclusions.”

Public opinion in Finland and Sweden has shifted massively in favour of membership since Russia invaded Ukraine on Feb. 24.

Finland and Sweden cooperate closely with NATO. They have functioning democracies, and well-funded armed forces and contribute to the alliance’s military operations and air policing. Any obstacles they face will merely be of a technical, or possibly political nature.

NATO’s membership process is not formalized, and the steps can vary. But first, their requests to join will be examined in a sitting of the North Atlantic Council (NAC) of the 30 member countries, probably at the ambassadorial level.