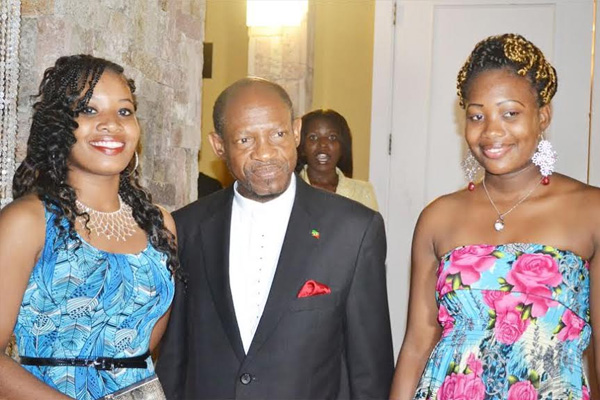 Charlestown, Nevis — It is not an everyday occurrence that young people, anywhere in the world, have a one on one with the head of a government. But two young Nevisians had the experience of their life when Prime Minister of the Federation of St. Kitts and Nevis, the Rt Hon Dr Denzil Douglas, played host to them.

They can prove it because Prime Minister Douglas also posed for a picture with Ms Zanya Wilkinson and Ms Victoria Newton, both 23 years old, when he visited Nevis recently to meet with residents of Nevis who are directly benefitting from the People Employment Programme (PEP).

“I see him as an advocate for young people,” said Ms Zanya Wilkinson. “He mingles with them, listens to them, talks to them. He asked us (Victoria and herself) what we were doing and after we explained to him, he told us that we have a future in building our own day care services.”

Prime Minister Douglas had visited Nevis on April 15 for a cocktail party to celebrate the success of the People Employment Programme, and after he gave the feature address where he thanked young Nevisians for accepting the call to join PEP, he mingled with all the PEP employees present, and individually talked to them.

“That was the first time I met him in person and got up close to him and spoke with him,” explained Ms Victoria Newton. “It was a very good experience because he asked me questions, like what is my goal and so forth. It was very good. He is very friendly and outgoing person, one who talks to everybody like wanting to know them better.”

Ms Wilkinson, who hails from Bath Village, stated that she joined PEP in February this year. She had travelled to Canada and when she returned she applied for a job through PEP and told them that she wanted to work with the kids because she loves children.

“By coming here (Steppin’ Stone) I made the right choice and I have no regrets whatsoever,” commented Ms Wilkinson. “Things are very difficult right now and I am truly grateful to PEP, it is a lifesaver.

She said that she was happy to have been attached to the Steppin’ Stone Nursery, which has been in existence for 24 years and she described it as the best there is when it comes to looking after the welfare of children whose parents have jobs to attend to.

Supervisor at Phase One of the Steppin’ Stone Nursery Mrs Oneka Fortune-Pollard said that with the coming of Zanya to the centre, she now has three caregivers working under her and that is making quite some difference because they are now able to give more individual attention to the children.

“Since Zanya has been here I must say that she is willing to learn,” noted Mrs Fortune-Pollard. “For example if she makes a mistake, I am always there to correct her and she takes the correction very well. I have seen improvement in her. She has a future in this field. She loves the children and she does not mind being with them.”

Though originally from Newcastle, Ms Victoria Newton now lives in Maddens. She also joined PEP in February this year, having worked at a popular store in Charlestown. She however sought to get a job that would be able to address her ambitions. She was attached to Steppin’ Stone Nursery Phase Two where her supervisor is the founder of the institution Mrs Patricia Dasent.

“I found PEP to be a better employer because it gives an experience through training for those who want to achieve their goals in life,” said Ms Newton. “I chose Early Childhood because teaching children is my dream job. I like to teach children so that at the end of the day I know that I can make someone happy.”

At the nursery school she is in charge of eight children. She reads them stories to them, teaches them the different parts of their bodies like the eyes, ears and nose, teaches them how to count and learn the ABC. According to Victoria, the kids are responding well as they are repeating what she would have told them to say and she is very happy with what she is doing.

“Because of PEP I am able to push my dream further of becoming a teacher, and teaching children,” concluded Ms Newton. “This is what I wanted to do for all of my life. Later on in the future, hopefully, I will be able to open my own, so I can teach other children as well.”