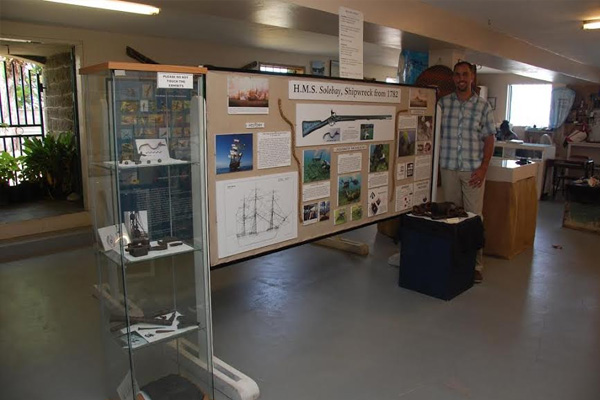 Charlestown, Nevis– The Nevis Historical & Conservation Society (NHCS) is pleased to announce the opening of a new exhibit at Charlestown’s Alexander Hamilton Museum: “HMS Solebay, Shipwreck from 1782.” In 2010, NHCS members supported by the Nevis Air and Sea Ports Authority (NASPA) and Envision Mapping UK Ltd., identified the wreck’s location off the southwest seacoast of Nevis. In 2011, historian and maritime archaeologist Chris Cartellone, a Research Associate with the Institute of Nautical Archaeology out of Texas, USA, led a team to document the shipwrecked remains including an anchor and several cannons. In the process, divers excavated 70 small lead and brass artifacts, took them to Texas for conservation, and returned them this June.

This American Revolutionary War era vessel was lost in the 1782 Battle of Frigate Bay between British and French warships. “While the exhibit shares this history,” Mr. Cartellone says, “the exhibit’s real purpose is to promote an education of the science of underwater archaeology and protecting future discoveries within the Federation of St. Kitts and Nevis.” Conservation required months to carefully remove sea salts from the ship’s artifacts which had been lying on the seafloor for 229 years. Scientists then photographed and studied the artifacts which helped identify the wreck as HMS Solebay. Artifacts available for viewing include musket balls, a trigger guard from a British marine sea service musket, a gun apron used to protect the touch hole of a cannon, brass nails and parts of the ship’s rigging. Through the artifacts, paintings, drawings, and photographs, visitors are invited to explore the history, archaeology, and conservation process.

Mr. Cartellone has kept the British Ministry of Defence updated on the project through the British High Commission in Barbados. As a lost Royal Navy warship, HMS Solebay remains crown property of the United Kingdom and is protected from looting under international sovereign immunity laws. Mr. Cartellone believes, “the NHCS has a unique opportunity to protect the artifacts while sharing them with the public.” The exhibit enhances Nevis’ heritage tourism and increases our historical knowledge.