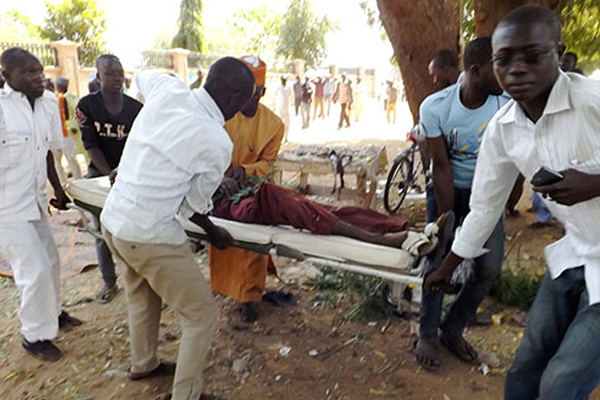 The hours-long attack on the strategic capital of Borno state was the Islamists’ second attempt to take Maiduguri in a week.

As government forces were holding off Boko Haram in Maiduguri, the air force of neighbouring Chad was pounding the militants’ positions in Gamboru, a town on Nigeria’s border with Cameroon 140 kilometres (87 miles)to the northeast.

With near-relentless violence plaguing much of the northeast, and Boko Haram still in control of large swathes of the region, fears are mounting over the prospect of organising polls on February 14.

The opposition All Progressives Congress (APC), which claims to be gaining momentum in the campaign against President Goodluck Jonathan, has rejected calls for the vote to be postponed.

But hundreds of thousands of voters in the northeast, an APC stronghold, could be disenfranchised by the unrest if the election goes ahead in two weeks.

Heavily-armed gunmen attacked the southern edge of Maiduguri at roughly 3:00 am (0200 GMT), setting off explosives as they tried to enter the city, several residents said.

Repelled in the south by troops backed by vigilantes, they regrouped and tried to take the city from the east, where they again met stiff resistance.

As the gun battles raged, “the whole city (was) in fear,” said resident Adam Krenuwa.

In other attacks in the northeast Sunday, a suicide bomber killed seven people in Potiskum, the economic capital of Yobe state, while two blasts killed five people in Gombe city to the south.

The bomber in Potiskum blew himself up shortly after midday outside the home of Sabo Garbu, who is running for a seat in the lower house of parliament on behalf of the ruling People’s Democratic Party (PDP).

Seven people died in the blast and seven others were injured, a police officer at the scene who requested anonymity said in an account supported by three witnesses.

Garbu and those attending his campaign meeting reportedly escaped unhurt.

It was not immediately clear if the attack was the work of Boko Haram.