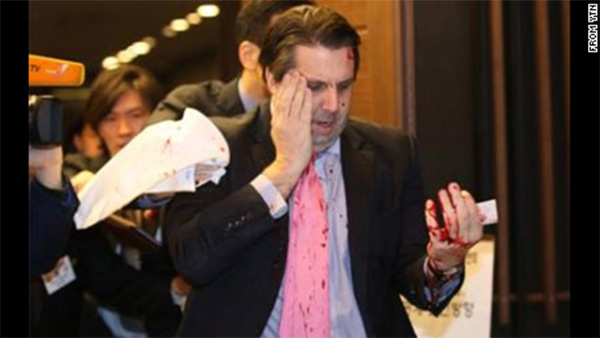 Seoul, South Korea (CNN)A man opposed to joint South Korean-U.S. military drills attacked the American ambassador in Seoul, slashing his face and arm as he was about to give a speech Thursday morning.

North Korea quickly called the stabbing a “knife attack of justice” and said it reflected “anti-U.S. sentiment” in South Korea.

The U.S. ambassador to South Korea, Mark Lippert, was in stable condition after undergoing more than two hours of surgery in which he got 80 stitches to his face. He will probably remain hospitalized for three to four days, said Dr. Jung Nam-shik at Yonsei Severance Hospital.

Police identified the suspect as Kim Ki-Jong, a 55-year-old man with a history of unpredictable behavior.

In 2010, he received a suspended two-year prison sentence for throwing a piece of concrete at a Japanese ambassador to South Korea, according to the Yonhap news agency.

The motive for his attack Thursday? He wanted an end to the South Korean-U.S. military drills to improve North-South relations, police said. The drills are held annually despite predictably harsh criticism from North Korea.

The North Korean government believes the attack is “just punishment for U.S. warmongers,” according to its official news agency, KCNA.

South Korean President Park Geun-hye, on the other hand, condemned it.

“This incident is not only a physical attack on the U.S. ambassador,” she said, “but an attack on the South Korea-U.S. alliance and it can never be tolerated.”

Lippert was attacked while attending an event organized by the Korean Council for Reconciliation and Cooperation, which advocates peaceful reunification between the two Koreas.

The U.S. Embassy did not request special security for the event, Seoul police said. Three police officers were on duty at the building’s entrance, and 25 others were on standby.

As one of the council’s 181 members, Kim was invited to the event, Seoul police Chief Yoon Myung-seon said. No one thought much of him going into the venue alone a few minutes after the U.S. ambassador; the event’s staff knew him.

Kim sat down at a different table than Lippert, then got up and ran to the ambassador’s right side yelling something that sounded like anti-American sentiments.

“When the man jumped on the ambassador, I stood up and jumped on the man, and they both fell on the ground,” a witness, Jang Yoon Seok, told CNN affiliate YTN. “Luckily I got on top of the man’s back and could press him to the floor. Then others came to hold him on the floor.”

Jang said he later saw the knife on the table. It had a wooden handle and did not look particularly sophisticated, he said. Seoul police said a knife, about 10 inches long, was used in the assault and the suspect brought it from home.

Videos showed the suspect pinned on the floor, rolled into a blanket and carried out of the building.

He was heard shouting, “The South Korea-U.S. military drills must stop.”

The drills began earlier this week.

After the attack, Lippert — clutching his right cheek and holding a bloodied arm — was photographed hurrying out of the Sejong Cultural Institute in central Seoul.

The cut to his face runs from his right cheekbone to his lower jaw and is about 4 inches long and about an inch deep, Dr. Jung said. Fortunately, there was no damage to his facial nerve.

Lippert also suffered five gashes in his left arm and hand, but he is not likely to have permanent damage to his arm function.

“The ambassador was very calm. People around him were taken aback, but he was very calm,” said Dr. John Linton. “He was speaking with his doctor on what to do. It was surprising.”

As the ambassador left and headed to the hospital, investigators arrived, hoping to figure out exactly what happened.

While there are videos showing what happened at the event, none of them will be from closed-circuit surveillance cameras, said Yoon, the Seoul police chief. The only such camera outside the building did help authorities determine exactly when Lippert and Kim came in.

Was the attack part of a larger plot? Did Kim have any help, implicit or explicit?

Not if you ask him, according to the Seoul police chief.

“Kim insists that this was done by himself,” Yoon said. “But police are still investigating if he acted alone and what his motive was.”

Park, South Korea’s President, told Lippert by phone that she was surprised and deeply troubled to hear about the attack — an incident similar to one targeting her several years ago — the Asian nation’s Foreign Ministry said on its website.

The South Korean leader vowed that authorities will “take necessary measures … with utmost seriousness and urgency” to get to the bottom of the latest attack. She also promised to keep close ties with the United States “so that the incident would not have any negative implications on the (South Korean)-U.S. alliance,” according to the ministry.

For Park’s American counterpart, President Barack Obama, the attack is personal as well as political.

That’s because Lippert is a longtime friend and confidant, having been part of Obama’s inner circle for years.

Obama called Lippert “to tell him that he and his wife Robyn are in his thoughts and prayers, and to wish him the very best for a speedy recovery,” National Security Council spokeswoman Bernadette Meehan said.

Lippert has been close to Obama ever since he arrived in the Senate in 2005. Lippert worked with Obama on the Senate Foreign Relations Committee and traveled the world with the then-senator as he garnered the foreign policy experience that helped pave the way for his presidential campaign.

When Obama declared he would run for president in the 2008 race, Lippert was by his side again, and was on the road with the candidate and ultimately served as the chief foreign policy adviser for the Obama campaign.

Thursday afternoon, Lippert tweeted that he was recuperating.

“Doing well & in great spirits! Robyn, Sejun, Grigsby & I – deeply moved by the support!” he tweeted, referring to his wife, his son and his dog. “Will be back ASAP to advance US-ROK alliance!” He then added in Korean, “Let’s work together!”