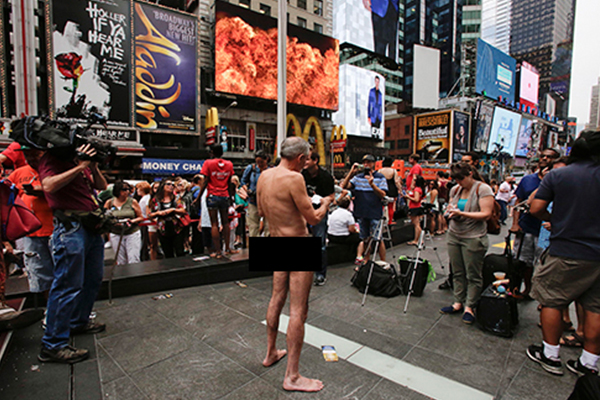 San Francisco Board of Supervisors candidate George Davis stripped buck naked in Times Square on Wednesday to campaign for the right to be nude in public.

Davis spoke out against a 2013 San Francisco public nudity ban introduced by his opponent, Scott Wiener. He says nudity is a form of expression.

After Davis’ speech he conducted interviews stark naked. Then he walked to where artist Andy Golub was body-painting another naked man.

Times Square Batmans and Elmos and other onlookers gawked, laughed and took photos while moving out of Davis’ way. One man loudly read Bible passages.

Davis ran for mayor in 2007 and for District 10 supervisor in 2010. He has been arrested twice for public nudity.