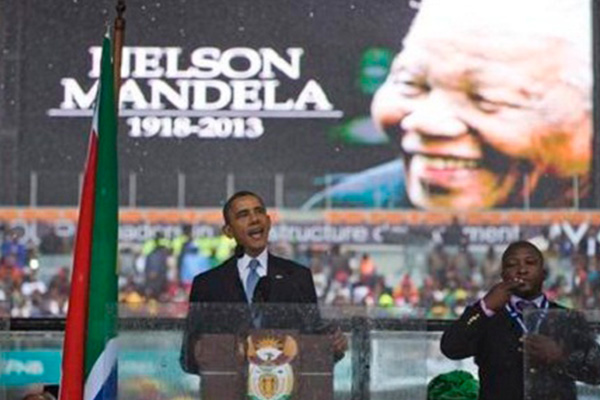 Johannesburg (AP) — US President Barack Obama exhorted the world Tuesday to embrace Nelson Mandela’s universal message of peace and justice, electrifying tens of thousands of rain-lashed spectators and prompting a standing ovation by scores of heads of state in a South African stadium.

In a speech that received thunderous applause, Obama urged people to apply the lessons of Mandela, who emerged from 27 years in prison under a racist regime, embraced his enemies when he finally walked to freedom and promoted forgiveness and reconciliation in South Africa.

Police were expecting a crushing crowd at FNB stadium and had set up overflow points with big screen TVs, but the foul weather and public transportation problems kept many people away. The 95,000-capacity stadium was only two-thirds full.

Addressing the memorial service for Mandela, who died Thursday at age 95, Obama pointed out that “around the world today, men and women are still imprisoned for their political beliefs; and are still persecuted for what they look like, or how they worship, or who they love.”

Among the nearly 100 heads of state and government were some from countries like Cuba that don’t hold fully democratic elections. On the way to the podium, Obama shook hands with Cuban President Raul Castro, underscoring a recent warming of relations between Cuba and the US.

In contrast to the wild applause given to Obama, South African President Jacob Zuma was booed. Many South Africans are unhappy with Zuma because of state corruption scandals, though his ruling African National Congress, once led by Mandela, remains the front-runner ahead of elections next year.

Some of the dozens of trains reserved to ferry people to the stadium in Soweto, a township which revolted in 1976 against white rule, were delayed due to a power failure. A Metrorail services spokeswoman, Lilian Mofokeng, said more than 30,000 mourners were successfully transported by train.

The mood was celebratory. A dazzling mix of royalty, statesmen and celebrities was in attendance.