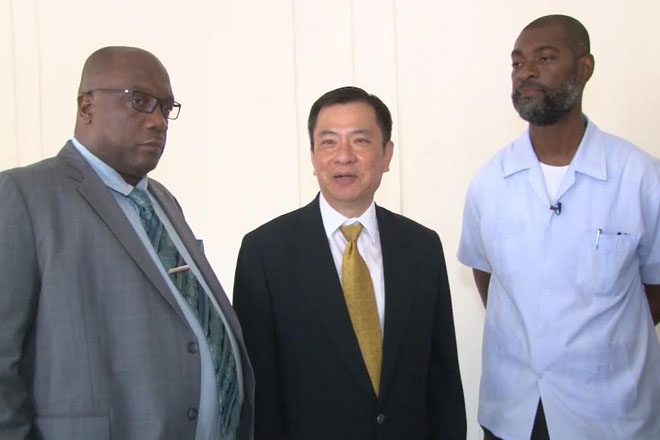 (ZIZ News) — On Wednesday government officials toured the Information and Communication Technology Centre in East Basseterre to get an update on the improvements underway at the location.

Prime Minister Dr the Hon Timothy Harris, and Resident Taiwanese Ambassador His Excellency George Gow-Wei Chiou were among the dignitaries touring the site to get an account of the work being done and the services that would be provided at the ICT Centre.

Chief Policy Analyst in the government’s I.T. Department, Pierre Bowrin explained that, when complete, the building will house a combination of office spaces and multipurpose rooms that will be available for rent.

“It is here we’re going to provide services for persons who’d like to start up. If you need a place to have a meeting, a videoconference; if you do not have those services that’s fine. You can come here and rent those services,” he said.

Minister of Communications, The Hon. Vincent Byron, thanked the Taiwanese government for its assistance in the renovation of the building which had been plagued with several issues.

“The centre had to be closed down because of major damage and there were large incidents of mould and other problems that the building had, and it needed to be completely renovated. And over the last months, with the assistance from Taiwan the government of St. Kitts and Nevis has worked to rebuild this IT centre that is really the future of young people in the ICT sector,” he said.

In October the Taiwanese government funded the renovation project to the tune of US $220,000.

Ambassador Chiou said his government was happy to help in the centre’s upgrade and they are willing to continue offering assistance afterwards.

“After this centre is finished my embassy will discuss with Minister Byron our next step, an ICT cooperative project. And that one will be more important because through that one we will try to improve the e-government in St. Kitts and Nevis,” he said.

Prime Minister Harris thanked the Taiwanese government for their consistent support of the Federation over the years, and their specific involvement in the development of the local I.T. sector.

“In the context of that plan for a modern St. Kitts and Nevis the ICT infrastructure, services and support are critical. So I want to thank them for partnering with us on this important project,” he said.

Officials say the ICT Centre is expected to be open by September.