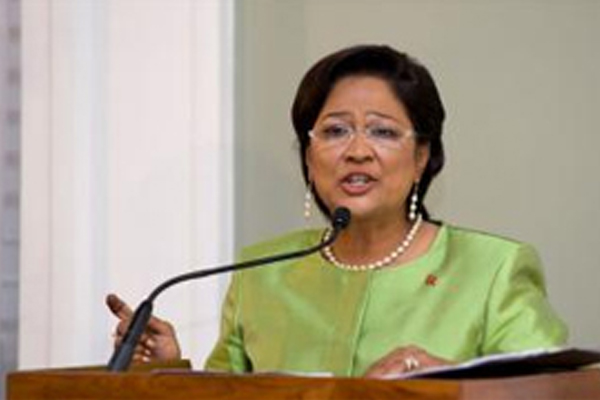 PORT OF SPAIN, Trinidad — The current leader of the opposition, Dr Keith Rowley, played a significant role in the fall of the previous administration of his party — the People’s National Movement (PNM) — both because of “his silence and permissiveness in the face of rampant corruption” and “because of his arrogance and refusal to listen and understand the concerns of citizens,” Trinidad and Tobago Prime Minister Kamla Persad-Bissessar said on Wednesday.

The prime minister was responding to remarks made by Rowley on Tuesday.

Persad-Bissessar took Rowley to task on his claim that the PNM opposition would have retained power if the previous administration had “managed the UDECOTT issue differently.”

In a statement issued on Wednesday, the prime minister said: “The opposition leader’s claim that the PNM would have retained power if the UDECOTT and Calder Hart issues had been better managed is an insult to the people of Trinidad and Tobago who survived their tyranny and failure as a government.”

Claiming that Rowley has never fully explained his own involvement in the rise of Calder Hart under the previous PNM government, the prime minister pointed to his “silence and permissiveness, sitting in Cabinet for five years after he alleged bid-rigging at UDECOTT” and recalled senior PNM members labelling Rowley as a “self-serving hypocrite”.

“Dr Rowley chose to make political theatre out of corruption when he stood in Parliament in 2009 and berated his own leader (Patrick Manning) and his own former Cabinet colleagues for condoning corruption. But he never once fully explained the reason why he not only remained in Cabinet after finding corruption, but also campaigned strongly for the PNM’s re-election in 2007.

“He never uttered a word about corruption because he was content to hold on to ministerial power in exchange for turning a blind eye to wanton corruption and wastage of hundreds of millions of citizens’ tax dollars,” Persad-Bissessar said.

The prime minister added: “In addition to such indecent wastage of huge amounts of money, to now suggest that the PNM administration’s fatal error was just Calder Hart and UDECOTT proves that Dr Rowley has not only misled his party, but also misled himself and is oblivious to his own failings.

“The fall of the previous government came as a result of a total failure to break the monstrous crime cycle that they systematically created and supported. The fall of the PNM came because of the astronomical increases in food prices which the previous Government could not control. It came because the PNM took a consistently growing and booming economy and brought it to decline and a loss of confidence by local and foreign investors. It came because of nine years of broken promises to deliver even pre-schools for our children.”

Persad-Bissessar added: “Dr Rowley has also forgotten that it was the PNM’s Vision 2020 that drew rage from the electorate because of a series of pie in the sky policy objectives that never once took into account the needs, the thinking and the personal goals of our citizens.

“It is arrogance and denial that still blinds Keith Rowley from seeing how the PNM has sacrificed its own chances of electoral victory by failing to understand its deficiencies, and refusing to modernize.”

Also remember, the prime minister said, “It was the same leader of the opposition who, during the 2010 election campaign, promised a court martial of the then captain of the PNM ship. It was the same Dr Rowley who hounded his former leader from office, so he can be the new captain of the ill fated ship.”