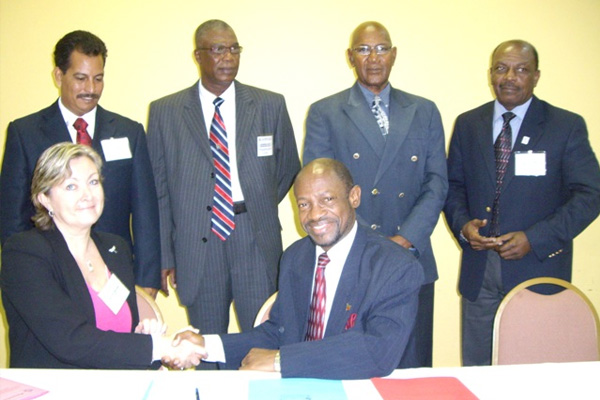 Basseterre, St. Kitts, (CUOPM) – PANCAP – the Pan Caribbean Partnership Against HIV AIDS – is reporting a reduction in the number of new HIV infections annually in the Caribbean.

This was among some of the gains in managing HIV/AIDS highlighted by PANCAP meeting of National AIDS Programme Managers, Senior Health Officials and HIV and AIDS Regional partners held in Port-Spain, Trinidad and Tobago from 21-23 October 2013.

Other accomplishments outlined in the communiqué issued after the meeting, which was funded by the PANCAP Global Fund Round 9 Grant and USAID, included improved access to HIV treatment and care and a high likelihood of eliminating mother to child transmission of HIV in the Caribbean.

The CARICOM Secretariat further noted that significant progress had been made in reducing HIV stigma throughout the Region. Participants were however concerned that recent studies showed that stigma and discrimination within the health sector still remained and needed to be systematically addressed and the practice of confidentiality reinforced.

The communiqué noted that the Region could benefit from more open acknowledgement and discussion of sex and sexuality so that more accurate information flows to youths and maturing adults could be fostered. It was also expressed that the current approach to youth sexuality was impaired by personal discomfort and outmoded norms.

The importance of achieving universal access to HIV treatment and the value of providing earlier lifelong treatment for persons living with HIV, while ensuring that the quality of care and adherence to medication were maintained was also emphasized.

Additionally, it was agreed at the meeting that through the PANCAP Justice for All Progamme the Region had an opportunity to accelerate its HIV response and include persons at higher risk who continued to face real discrimination in their daily lives.