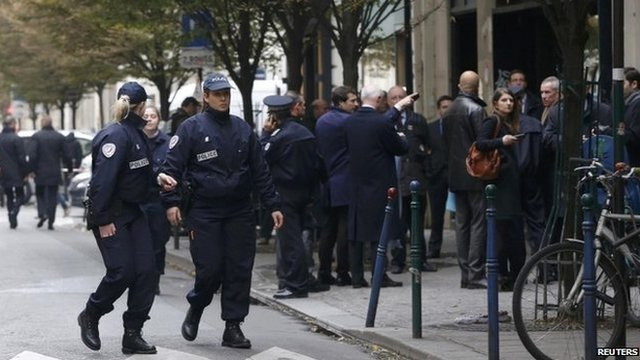 (BBC) A manhunt has been launched in Paris after a gunman attacked offices of the newspaper Liberation and opened fire outside the bank Societe Generale.

A photographer, 27, was seriously hurt at Liberation and a motorist was forced to drive to the Champs Elysees before he was allowed to go.

Police are looking for the same man who broke into the Paris offices of the 24-hour news channel BFMTV on Friday.

Police have now been stationed outside all the main media offices in Paris.

Liberation said images of the suspect corresponded with those of the attacker at BFMTV.

The suspect is said to be between 40 and 45, shaven-headed and overweight.

The BBC’s Christian Fraser in Paris says that, for a time, a police helicopter hung over the Champs Elysees amid fears the gunman might be heading towards the Eiffel Tower, but it is speculated that he might have gone into the metro.

People have been encouraged to stay indoors. Police say the suspect is calm and assured, our correspondent reports, and each time has walked away from the scene of his attacks.

French media say the hostage-taker told the motorist he was armed with grenades.