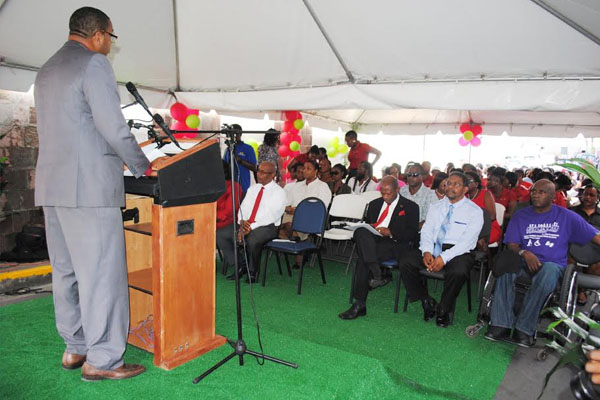 Basseterre, St. Kitts — Federal Minister with responsibility for the People Employment Programme (PEP) the Hon Glenn Phillip has said that the programme, which was launched in December 2012, has benefitted thousands of young men and women both on St. Kitts and on Nevis.

“While our country seeks to implement key social and economic reform programmes that will shape a new, a more vibrant and a more progressive St. Kitts and Nevis, the words opportunity, empowerment, skills training and national pride take a central role in shaping that agenda that inspires a nation, young and old, male and female, to action and achievement,” observed the minister.

The Hon Phillip, who is also the Federal Minister of Youth Empowerment, Sport, Information Technology, Telecommunications and Posts, made the remarks on Friday January 16 at a function held to mark the official opening of the new PEP Secretariat at the corner of Church and Princess Streets in Basseterre.

He observed that when the Federal Government of St. Kitts and Nevis launched the People Employment Programme back in December 2012, the vision was to create opportunities for growth and accomplishment in the lives of the country’s people.

The government at that time recognised that if it were to forge a new economy and more vibrant society, pride of place had to be given to all the people in the country, in partnership with the private sector.

“Today, because of the programme, thousands of our young men and women both on St. Kitts and on Nevis, are more competently skilled to offer excellent service to nationals and visitors alike whether it is in the area of food and beverage sector, craft and joinery, hair and cosmetology,” observed the Hon Phillip.

“I am happy to say that when the naysayers have had to eat humble pie and admit that the programme has been a blessing to the country, all along your government has had the vision and the courage to stand beside and behind our people.”

He told the large gathering that had assembled outside the Government Headquarters which also included Prime Minister the Rt Hon Dr Denzil Douglas, that the work to rehabilitate the formerly unoccupied government offices was done by persons who were trained by the People Employment Programme.

“Under the supervision of Mr Elbert Pemberton, these gentlemen and women have shown that our next wave of infrastructural development in the construction sector and beyond is in good hands. I want to recommend them to our private sector and foreign investors as the right people to build and install the right finishing and aesthetics.”

Speaking at the same function, Chairman of the PEP Steering Committee, Mr Elvis Newton, explained that when he was initially requested to chair the committee, he was somehow hesitant because he thought perhaps the programme may not have been sustained for the length of time that is has now been sustained.

“Today I am very satisfied, I am very pleased with the role that we have played as a committee in ensuring that this programme has been sustained and that the programme has touched the lives of so many persons,” noted Mr Newton.

He added that while the programme touched directly on the lives over 3,000 persons, the impact was far much greater as those people have families and they live in communities and do business in those communities and they too would have been impacted indirectly by the People Employment Programme.

Mr Newton said that there was the need to do an assessment “about the impact of this PEP programme in terms of the economic development of the country in the past two years. I am pretty certain that we would recognise that there has been a very significant impact throughout St. Kitts and Nevis as this programme has evolved.”

PEP Project Director Mr Geoffrey Hanley said that the People Employment Programme, which was officially launched in December 2012 is a government initiative which today can boast of the fact that it has been contributing to national, social and economic transformation of the twin island Federation.

“Indeed PEP is a blessing and we thank God for the life changing opportunities this programme offers,” said Mr Hanley. “Today we see the grand opening of the new PEP Secretariat annex, providing new facilities and a much improved work environment for our citizens.

“I am sure that government’s investment through the SIDF in this programme has been good value for money. Today’s activity saved the government thousands of dollars as all the renovation work on this building was done by PEP participants. PEP is at work in this Federation and we are very excited as the legacy of PEP will live on.”