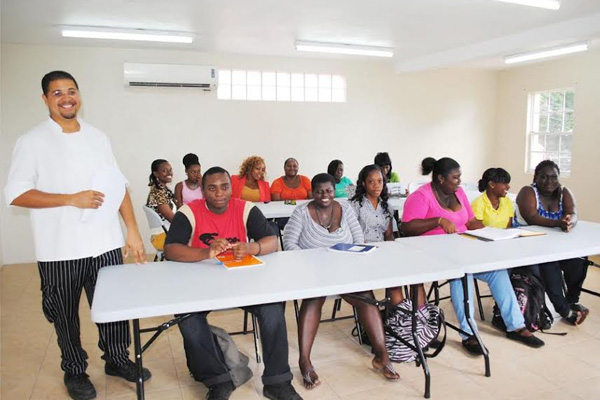 PEP preparing Nevisians to work in the tourism industry

CHARLESTOWN, NEVIS — The People Employment Programme (PEP), on realising the needs of Nevis’ high end tourism industry, it has enlisted the services of an award-winning chef to train and build a cadre of workers the industry could rely on when the need arises.

In what has been described as a win-win situation, the People Employment Programme has at the same time given young Nevisians an opportunity to learn skills in the field of culinary arts, while drawing a salary.

A class of 20 under the tutelage of Mr Michael Henville started in November last year at the Jessups Community Centre, but two of the trainees have since taken up employment elsewhere.

“I am doing the PEP training for culinary arts and a little bit of hospitality management as well,” said Mr Henville. “When the class started, there were one or two that had some basic knowledge about the food industry, food preparation and food serving, but the majority of them had no training whatsoever and had little to no experience in the food industry.”

According to the PEP facilitator, the course started with the basics from food safety, proper food sanitation, proper personal hygiene, and proper workplace hygiene, saying that it was important for the trainees to know those core fundamentals of culinary arts, as it will help prepare them for the next stage in the programme.

“Eventually we will be doing some practical cooking, and then at the end of the course they will come out with a very good basic knowledge of the culinary arts,” explained Mr Henville. “I believe that is very important because you cannot come to the level of Sous chef or even executive chef without the core fundamentals.”

The trainees will at the end of the programme be certified, and that will help them get employment in the industry or even start their own food business. He also noted that people in the industry will no longer spend money to train workers as trained ones will be readily available.

“PEP is an excellent start as it is providing some type of employment for the people taking the courses,” noted Mr Henville. “It is also helping to build a pool of employees now that after we send people through these courses, the local restaurants and hotels will now have a core local market that they can choose from for employment.

“So PEP is helping the country because these people will become employed in the country and then I believe it will save time and money for the restaurants and hotels because they won’t have to look outside of St. Kitts and Nevis.”

A culinary arts trainee, Ms Jeanette Neil of Gingerland, says that she had initially joined PEP as part of Engaging Qualified Interns Project (EQUIP), but when two training programmes (culinary arts and cosmetology) were introduced, she decided to learn a skill that would be more helpful to her and the country in the future.

Ms Marecia Williams, who has previous office work experience, said that PEP has given her a chance to learn a skill that will be a foundation for a better life in the future.

“This programme gives people an opportunity whereby you can learn a skill,” said Ms Williams. “You have your education; no one can take that from you. I am very thankful because it is an opportunity that is good because as young people we have something to do to build up ourselves and we can learn from there and then builds others and give something back to the community.”