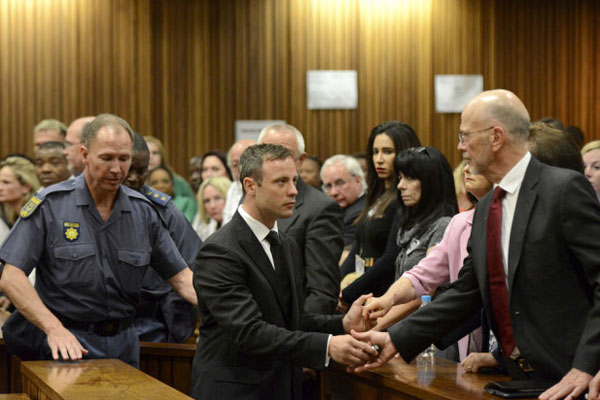 Johannesburg, South Africa (AP) — Oscar Pistorius spent his first night of a five-year jail term in a single cell in the hospital wing of a prison in the capital, Pretoria, said a prison official.

He seemed confused and tired when he entered the Kgosi Mampuru facility, prison commissioner Zebilon Monama told the South African Press Association. Monama said Pistorius was tense as wardens took his fingerprints and the prison chaplain met with him soon after his prison number was issued on Tuesday.

“After he saw the chaplain our psychologist went to see him just to try to talk to him,” said Monama.

Pistorius had a medical examination before being locked in his cell in a separate wing of the prison where the double amputee Paralympian joins eight other inmates with disabilities and will be under routine 24-hour observations with two nurses on duty.

Pistorius was sentenced to five years in prison Tuesday after he was found guilty of culpable homicide for the shooting death of his girlfriend Reeva Steenkamp.

Throughout his trial Pistorius maintained that he mistook the model for an intruder when he shot her through the bathroom door in the early morning hours of Valentine’s Day in 2013, with his defense arguing that the gold medalist’s physical disability had made him particularly fearful.

South Africa’s prisons house an average of 128 disabled prisoners each year, less than 1 percent of the country’s total 157,000 prison population, according to the department of correctional services.

The country’s prisons came under scrutiny during Pistorius’ sentencing hearing as the defense team argued that conditions were unfit for persons with disabilities while the prosecutors maintained that the state had all the necessary facilities for physically impaired prisoners.

During Pistorius’ sentencing hearing, prison officials assured the court that the athlete will have access to his private therapist and physician if necessary.

The mother of the woman killed by Pistorius said she is satisfied with Pistorius’ sentence, saying it was the best the family could expect.

“We’re not looking for vengeance or for him to get hurt; we’re just happy because he’s going to be punished for what he’s done,” she told the British magazine, Hello.

The celebrity athlete is required to serve a minimum of 10 months of his 5-year sentence in a prison cell that activists describe as comfortable compared to the cells of able-bodied inmates.