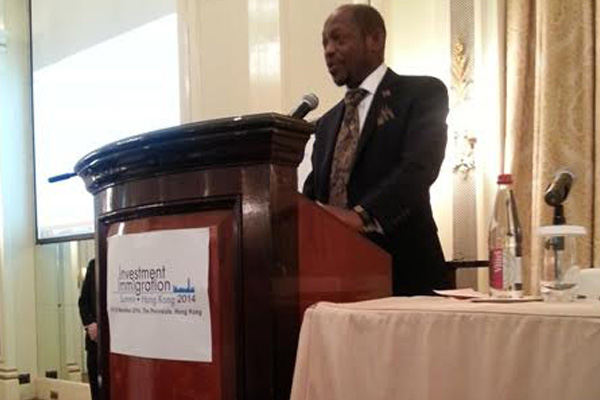 Basseterre, St. Kitts (CUOPM) – Over 250 immigration professionals from China and around the world were told Monday that fiscal restraint and sound management are domestic features of the Federation of St. Kitts and Nevis, while credibility and legitimacy are the features internationally.

Speaking at the annual conference organised by Beacon Events in partnership with the Harvey Law Group at the Peninsula Hotel, in Hong Kong, St. Kits and Nevis’ Prime Minister the Rt. Hon. Dr. Denzil L. Douglas noted that despite statistics of roughly 100 square miles and a population of 50,000, there is nothing either miniscule or undersized about the seriousness with which St. Kitts and Nevis takes the matter of governance.

“Indeed, our history has impressed upon us the importance of doing everything in our power to ensure that our country is well managed, our society stable, and our future secure. We are aware that being a small nation gives us very narrow margins for error. And so my Government has long understood that the cornerstone of our existence has to be focus, discipline, and a commitment to excellence,” he told participants.

“Our reputation within the international financial community, as a result, reflects this,” said Dr. Douglas, who gave a brief history of the nearly 400-year old sugar industry to what has describe as a seamless, and remarkably smooth transition upward social and economic trajectory fuelled by tourism, manufacturing, non-sugar agriculture, information & technology, financial services.

“There is no denying that the global economic crisis, which began gathering steam in 2008, posed a drag on that trajectory. But it is also a fact that through painstaking planning and meticulous attention to detail, we were able to avoid, in St. Kitts and Nevis, much of the economic trauma and distress, indeed much of the societal and economic unravelling that gripped much of the world,” said Prime Minister Douglas.

He said St. Kitts and Nevis was able to announce, in a joint press conference with the International Monetary Fund this year, that due to its careful management of the economy, the Federation was in a position to return to the Fund – significantly ahead of the due date – some US$40 million.

“These were funds which both the Fund and we had thought St. Kitts and Nevis might need, in the event that the global crisis presented us with any challenges that we were unable to handle on our own. However, the team of financial technocrats which I lead, as Minister of Finance, was able to ensure adherence to a well-thought out program of financial management, and as a result those funds were simply never needed,” said Dr. Douglas.

He pointed out that with the United States, as a valued, highly respected ally, and supremely powerful ally registering 1.9% economic growth in 2013, “we were pleased that our own economy, which is so intricately interwoven with that of the United States, grew some 3.8% during the same period when many nations in the region and around the world were experiencing severe and destabilizing economic challenges.”

He disclosed that in May of this year, St. Kitts and Nevis completed a 3-year Stand By Arrangement with the IMF.

“Each of the nine IMF reviews conducted over the preceding three year period – without exception – affirmed St. Kitts and Nevis’ reputation for good governance, fiscal discipline, and sound economic management. Indeed, our faithful adherence to internally established management standards, standards designed to protect ourselves from the ravages of the global crisis, while at the same time to serve as an economic stimulus resulted in the Fund’s repeated affirmation of the competence, constructive restraint, and collaborative ethos of my Government in the management of the St. Kitts and Nevis economy,” said the Prime Minister, who added:

“Our outstanding performance during the riveting global conditions of the past six years is compelling evidence in this regard.”

“It is against this backdrop, then, that we look today at St. Kitts and Nevis’ Citizenship by Investment Programme. And to do so, we should look at the context in which this programme exists: Our defining features, domestically, Ladies and Gentlemen, are fiscal restraint and sound management. And our defining features, internationally, are credibility and legitimacy. And this is so because upon assuming office in 1995, my Government committed itself to ensuring that our country’s limited population and land mass would never lead to limitations in the areas of economic and financial governance,” Dr. Douglas said.

“This is so, also, because my Government understands the importance of strong bilateral relations in this highly globalized, unalterably interconnected world of the 21st century. There are, as we know, for example, many nations which, unfortunately, have been placed on the OECD so-called “black list”. We are pleased to be able to state, however, that an exhaustive search of that list, year after year after year, will reveal that St. Kitts and Nevis appears nowhere on that list – because we have consistently met the standards established by the OECD in that regard.

In addition to our relationship with the OECD, St. Kitts and Nevis has a long history of constructive relations with the United States, with crime prevention, strengthened national security training, and the enhancement of our law enforcement infrastructure constituting the leading areas of US/St. Kitts and Nevis cooperation and collaboration.”

“That is why, for example, my Government responded so quickly and so positively to an advisory issued by the United States earlier this year, alerting us to the fact that some individuals could be using our passports to facilitate financial crime. My Government promptly summoned all local and international financial institutions– including the Eastern Caribbean Central Bank. This we did to immediately elicit their views, concerns, and recommendations on the way forward. Service-providers and CBI-related developers were summoned to a subsequent meeting as well, at which time there was an underscoring of roles, responsibilities, standards, due diligence and other crucial aspects of the St. Kitts and Nevis Citizenship by Investment Programme.

He said the economic security and social stability of St. Kitts and Nevis, then, are widely understood to be the underlying motivations for all that his Government does.

“I believe, Ladies and Gentlemen, has been key to the international appeal of our country’s Citizenship by Investment Programme,” said the Prime Minister, who further pointed out that St. Kitts and Nevis leads the Eastern Caribbean in direct foreign investment.

“We lead in economic growth – both actual (2013), as well as projected. We lead in manufactured exports to the United States – exporting more, indeed, than all nine other Eastern Caribbean nations and territories. We lead in the breadth and specificity of the social safety net programs we have developed for the most vulnerable members of our society,” said Dr. Douglas.

“For almost 50 years now, St. Kitts and Nevis has had free and compulsory high-quality education for all. Without exception. Freedom of speech. Freedom of assembly. Freedom of religion. Indeed, all the freedoms articulated in the United Nations Universal Declaration of Human Rights are respected and observed by the Government that I am so honoured to lead,” he stressed.
.
He said that the Citizenship by Investment Programme that attracts only the most discerning of prospective citizens, is in the best interests not only of the men and women who are citizens of St. Kitts and Nevis by birth, but by those who become citizens of St. Kitts and Nevis by way of the country’s Citizenship by Investment Programme as well.

“Very high due diligence standards define my country’s Citizenship by Investment programme. Once these standards have been met, there are two ways in which one can achieve citizenship in St. Kitts and Nevis: (i) by purchasing real estate, or (ii) by investing in the Sugar Industry Diversification Foundation, which then invests in the type of agricultural, commercial, technical, health-related, cultural, infrastructural, national security and other projects that make St. Kitts and Nevis the outstanding social, economic, and governmental entity that it is,” he said.
Also delivering keynote addresses were the Hon. Sergio Marchi, Former Minister of Immigration for Canada and Hon. Tuariki Delamere, former Minister of Immigration of New Zealand.