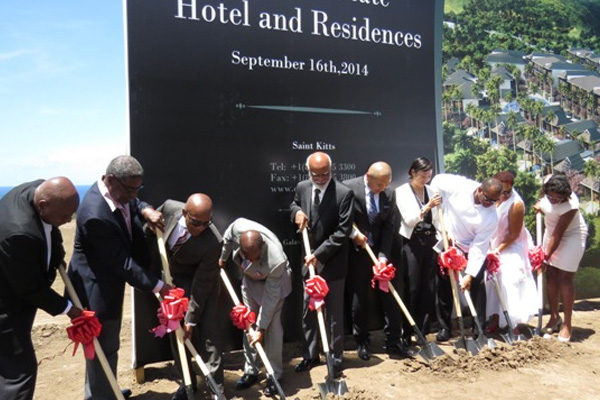 Basseterre, St. Kitts (CUOPM) — Several multi-million dollar resort projects now under construction will assist in meeting the Government’s medium-term goal of doubling the number of hotel rooms and the number of stay-over visitors to St. Kitts and Nevis.

Prime Minister the Rt. Hon. Dr. Denzil L. Douglas told a mammoth crowd and scores of visiting diplomats at the Independence Ceremonial Parade that the twin-island Federation continues to move forward at a rapid pace.

“We are truly a Nation on the move. Within a period of two to three years we expect to more than double the number of hotel rooms that we have available in the Federation,” said Prime Minister Douglas.

Among the projects he mentioned are the continued development of Kittitian Hill, the expansion of the St. Kitts Marriot Resort, the renovation and upgrading of the Royal St. Kitts Hotel Resort, the construction of the Park Hyatt Hotel, Imperial Resort, Pelican Bay Hotel Resort, the Koi Resort & Residences, the Heldon Estate Hotel, T-Loft at Pirate’s Nest and the construction of a range of other hotel properties approved under the citizenship by investment programme in both islands of Nevis and St. Kitts.

“This will help achieve our medium-term goal of more than doubling the number of stay-over visitors that grace our shores each year,” Prime Minister Douglas said.