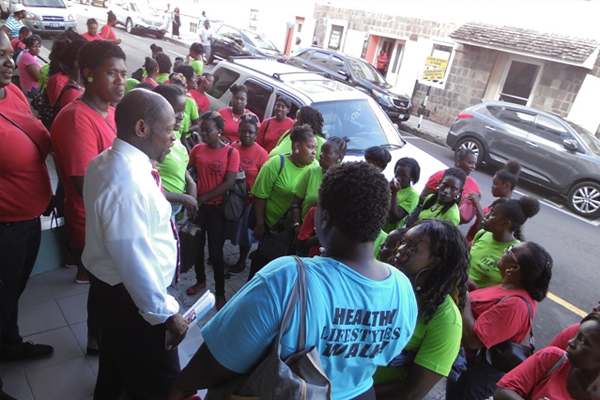 Basseterre, St. Kitts(CUOPM) — Empowerment of all persons in the society quality of life of the small man have always been the hallmark of the 82-year-old St. Kitts-Nevis Labour Party in and out of government, Prime Minister the Right Hon. Dr. Denzil L. Douglas reiterated on Tuesday.

“We emphasize basically the policies of the Labour Party in Government and out of Government. The small man, the middle man, the big man all must be represented. But in particular where the small man, who has been deprived for years of being a landowner, of being the owner of assets that can make him wealthy and well off. The guy who is poor and who is aspiring and who by means of hard work and dedication and aspiring of course to be whatever he wants to be, and is now driving his BMW or any model car; these are the people to whom the Labour Party is pledging continued prosperity and development,” said Dr. Douglas during his weekly radio programme “Ask the Prime Minister.”

He pointed that people must have the opportunity to move from wherever they are to the highest levels in the society.

“This is a Government that believes in movement, it believes in progress, real progress and real change in the lives of our people especially the ordinary people,” said Dr. Douglas in response to a call from a female listener.

“One of the things that she has just said is that we shall continue to look out for our poor people. You can be assured that over the years this St. Kitts-Nevis Labour Party Government has been a voice for the voiceless. We have given comfort and hope to those who for many, many, many, years had no hope to live and aspire to realise their dreams here in St. Kitts and Nevis,” said Prime Minister Douglas, who reiterated his commitment to continue to serve in the best interest of the small man and all the people of St. Kitts.

“It is for you that I live and work and serve as I do for the rest of citizenry of this country. You said you ‘love me’, I love you too. That is really a relationship that we have. It is a loving relationship between those who have been there in our society and who have felt the effects of the Labour Government’s policies,” said Prime Minister, who cited policies like the land and home ownership, the increase in the minimum wage and the introduction of the gratuity for persons retiring in the hospitality and manufacturing sectors.

“We (the St. Kits-Nevis Labour Government) have been making sure that we’ve had wage increases given to our people. We have given our home owners the pride and joy of being home owners when they never thought in their lives they would have really had this privilege. We have provided the gratuitous payments to those who are in the hospitality and in the manufacturing sectors and all those in fact who are in other sectors, private sectors which do not have the privilege of a long term gratuity from their employer,” said Prime Minister Douglas.

“The Government is providing this opportunity. This is your Government. This is why we say we will continue to progress this country and progress people’s lives thus reflecting real permanent changes in the lives of our people,” Prime Minister Douglas told listeners.