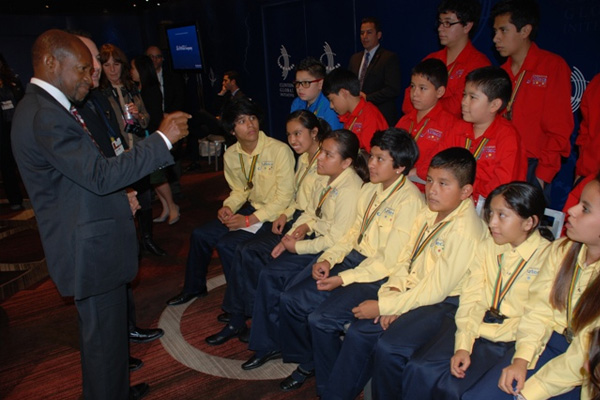 PM Douglas tells young nationals they can impact the world

BASSETERRE, ST. KITTS (CUOPM) – Young people in St. Kitts and Nevis are being urged to prepare themselves to compete with the rest of the world.

This advice has come from St. Kitts and Nevis’ Prime Minister the Right Hon. Dr. Denzil L. Douglas who was at the time responding to the accolade showered on him by former United States President, the Hon. Bill Clinton during the closing ceremony of the annual Clinton Global Initiative, which coincides with the General Assembly of the United Nations.

During the ceremony, President Clinton invited Prime Minister Douglas on stage and praised him for initiating the availability of low cost drugs to HIV/AIDS patients around the world.

“I think that once he saw me in the audience at the front, he most likely remembered the work that we had done together and given the fact that the Clinton Global Initiative is engaged in activities of this kind, I think he wanted to draw to the attention of the hundreds of people who were there and the millions who were viewing via television and online, that the CGI was in fact working.

I felt good because to be identified as one, at least would have made a contribution in changing people’s lives; I felt that really that is what I am in public service to do. I believe that to a large extent, what I did in Barcelona (Spain) so many years ago, asking the President at that time to become engaged in a serious problem that we have in the Caribbean Region,” Prime Minister Douglas said during his weekly radio programme “Ask the Prime Minister” on Tuesday.

Dr. Douglas told listeners it was part of his duty in the service to the people of St. Kitts and Nevis and to a large extent the Caribbean and the World.

“That’s why I continue to say to our young people, you are being provided the tools now at your disposal, where you can stay here in St. Kitts and Nevis and impact the rest of the World in a positive way. You are being prepared to compete in a World that is becoming much more competitively fiercer. I know we are going to be able to do our part successfully, if we would only prepare ourselves and seize the moment whenever it presents itself,” said Prime Minister Douglas.