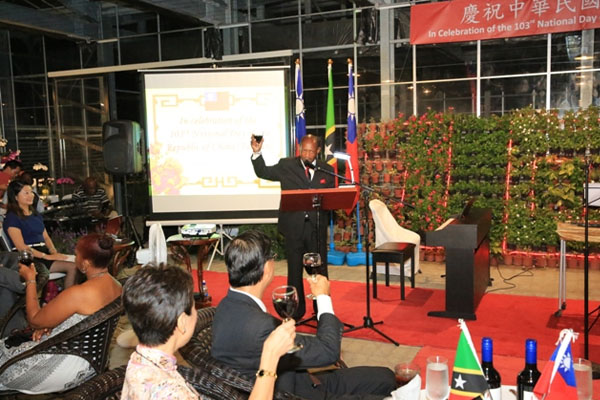 Raising a toast to mark the 103rd National Day of its Asian ally, St. Kitts and Nevis Prime Minister the Rt. Hon. Dr. Denzil L. Douglas also raised a second toast to His Excellency Ambassador Miguel Tsao – “whose unfailing effectiveness and constructive spirit have proven to be such extraordinary assets to his nation, and which have served to steadily strengthen the bonds that exist between his nation and ours.”

“The Government and People of St. Kitts and Nevis, Mr. Ambassador, wish the Government and people of the Republic of China on Taiwan continued peace, continued prosperity, and an ever-expanding global recognition of the contributions that Taiwan has made – and continues to make – to our world,” Prime Minister Douglas said during a dinner to mark the milestone at the St. Kitts Eco-Park at Sir Gilles.

“Taiwan, as you know, is an island – a tropical island. And there was a time when it was a colony – a colony of Portugal. While we certainly do not wish to dwell on the colonial period of Taiwan’s history, it is a fact that the Portuguese officially named the island “Illha Formosa” which means “Beautiful Isle”. Anyone in this room who has had the good fortune to visit Taiwan, and who has experienced its majestic mountains, its gentle lowlands, and its aquamarine waters instantly understands, I am sure, why those individuals, so many centuries ago, named the island as they did,” said Prime Minister Douglas, who further pointed out that the Republic of China (Taiwan) is the first – and oldest – republic in Asia and today, it epitomizes the power of the human spirit.

Taiwan’s culture, said Prime Minister Douglas is rooted in rich and intricate traditions, made manifest in great attention to detail and beauty and it has established itself as a leader in the worlds of business and finance.

“As we speak, there are young Kittitians and Nevisians in Taiwan pursuing degrees in civil engineering, and medicine, in computer science and international business, in environmental biology and fisheries science. All key – I am sure you will agree – to our country’s continued forward movement. All key to our country’s steady march toward becoming the world’s first sustainable island state,” said Prime Minister Douglas.

The St. Kitts and Nevis leader said the 23 million people of Taiwan have made extraordinarily good use of the natural and other resources which nature bestowed upon them, and its 14,000 square miles of territory bears testimony to the focus and discipline which undergird that nation.

“From information technology to fire and rescue services, from agriculture to renewable energy, from community development to educational enhancements, Taiwan has proven itself to be a friend. In a world that is yet to awaken to the constructive role that Taiwan is playing beyond its shores, St. Kitts and Nevis has striven – and will continue to strive – to bring that day of global awakening ever closer,” said the Prime Minister, who suggested that the event at the St. Kitts Eco-Park in celebration of the 103rdNational Day of the Republic of China (Taiwan) “is one of the clearest and most striking symbols of St. Kitts and Nevis/Taiwan friendship.”