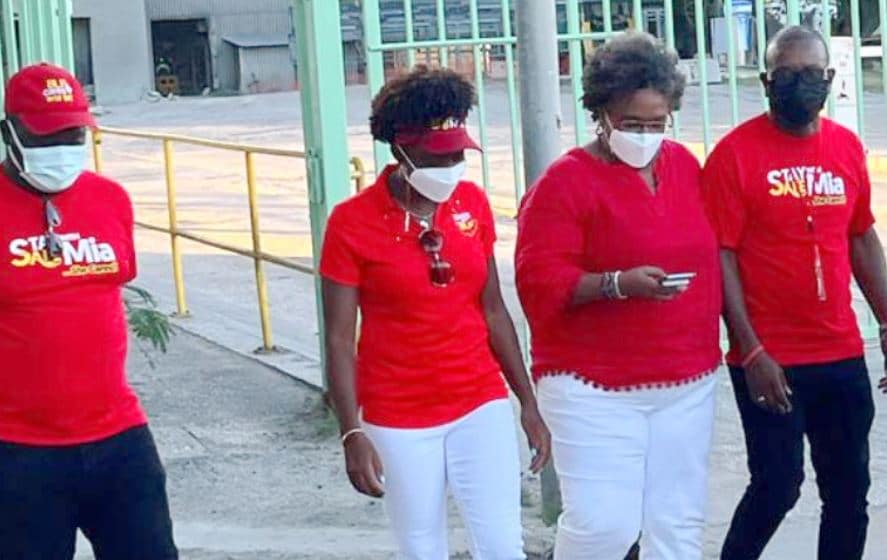 Barbadian voters bought into the philosophy that they are “safer with Mia” wholesale and re-elected the ruling Barbados Labour Party (BLP) into government with a consecutive clean sweep of the 30 seats in Parliament.

Preliminary results showed that the BLP had won all the seats in the election that Prime Minister Mia Mottley called 18 months ahead of the constitutional deadline and in the process allowed the party to become only the second political organisation in the Caribbean to sweep all the seats in an election on consecutive occasions.

The other time that has been achieved was in Grenada when Prime Minister Dr Keith Mitchell led his New National Party (NNP) in winning all 15 seats in 2018.

Mottley made it seven out of eight victories in the St. Michael North East constituency, easily defeating the Democratic Labour Party (DLP) candidate, Damien Griffith by a margin of 3216 to 476. Roy Turney of the BFP polled 48 votes.

Mottley, who had already signalled that this would be her last general election, told supporters that she would be announcing her new Cabinet on Monday and that later on Thursday, she along with Dale Marshall will go to meet with President Dame Sandra Mason to be sworn into office. Marshall returns as Attorney General.

Mottley defended the decision to call the election ahead of the constitutional deadline, saying it was important to “take fresh guard” as the island moves into the future to deal with a changing global socio and economic situation.

“I thank, you, the people of Barbados for accepting us at our word that if we do not fix our problems starting from tomorrow we will not be able to guarantee safety to our people in the next 10 to 15 years”.

Mottley said the three-week campaign had been “rough” telling supporters “we wanted to start 2022 as far as possible on a fresh guard…and you have given us that opportunity”.

She recalled that on May 27, 2018, she had indicated to the nation that “too whom much is given much is expected,” adding “I repeat tonight that that is our commitment to you the people of this nation.
”I promised you …we would be the opposition to ourselves and regrettably there were those who felt that they would spawn their own opposition and do the things that would make this country almost difficult to govern,” she said, an apparent reference to Bishop Joseph Atherley, who had been a member of the victorious 2018 BLP team, but left to become Opposition Leader.

Bishop Joseph, who headed an alliance into the general election, was among the victims of the new clean sweep.

“Tonight the people of Barbados have spoken,” she said, vowing the new administration would continue to put the nation’s welfare above any parliamentary majority.

Mottley said she also wanted to address the allegation that her decision to call the general election ahead of the early was to facilitate a one-party state in the country, “when in truth and in fact our Constitution admits in a multi-party democracy of the people giving all of the seats to one entity.

De Peiza, who led the DLP into a general election for the first time, was soundly defeated in the St. Lucy constituency, considered a stronghold of the party, polling1, 095 votes as against 2.038 for the BLP’s Peter Phillips.

De Peiza said that while she was conceding and congratulating Prime Minister Mia Mottley led BLP, she had no immediate plans to step down as political leader.

“We will make those decisions at a later stage,” she said, adding that “I am proud of what I have established.”

She said that the voter turnout in the election “continues to be “depressing” adding that ‘serious work will have to be done going forward.

“It was a reckless time to call an election, depressing voter turnout,” she said, adding that she was also “disappointed with the results”.

In 2018, Mottley led the BLP to a 30 nil trouncing of the then Freundel Stuart DLP government and De Peiza took over the leadership of the party that same year and had hoped to reverse the fortunes of the decades-old political party.

“The election has all been about Mia Mottley and she held on to the swing of 2018,” said political scientist, Devaron Bruce, as political commentators called on De Peiza to step down.

Senior lecturer at the University of the West Indies, Dr Tennyson Joseph said that the DLP leader should step aside and the results were “a resounding defeat of her and the party”.

A total of 108 candidates, representing seven political parties and nine independents contested the election that political observers had said would have been a straight fight between the BLP and the DLP.

Despite a last-minute unsuccessful attempt by a member of a small political party here to ask the High Court to postpone the election on the grounds that thousands of Barbadians, who have tested positive for the coronavirus (COVID-19), the Electoral and Boundaries Commission (EBC) said the poll was held without any major controversy.

The EBC said that 266,330 persons were eligible to cast ballots in the election and political commentators on television said it appears that the turnout was below 50 per cent.

Barbados is the latest Caribbean country to be staging a general election during the coronavirus (COVID-19) pandemic following countries like St. Kitts-Nevis, Trinidad and Tobago, Jamaica, Bahamas, St. Lucia, Cayman Islands and the Turks and Caicos Islands.

When she announced the date for the snap election last month, Mottley, the first woman to head a government here, said that in recent days, she had observed what she termed “the silly season” defining how Barbadians regarded the future socio-economic development of the island, at a time when it was also dealing with the impact of the coronavirus (COVID-19) pandemic.

“And hence our manifesto was entitled Our Barbados-Owning our Future. It is our solemn commitment that there are many things that must now be on the front burner and that is why we came to you earlier.

“We could have stayed on for another 18 months and drawn salaries and done just enough to keep us going, but we understood that it would not be enough to keep this country safe but to build the platform for prosperity,” Mottley said.