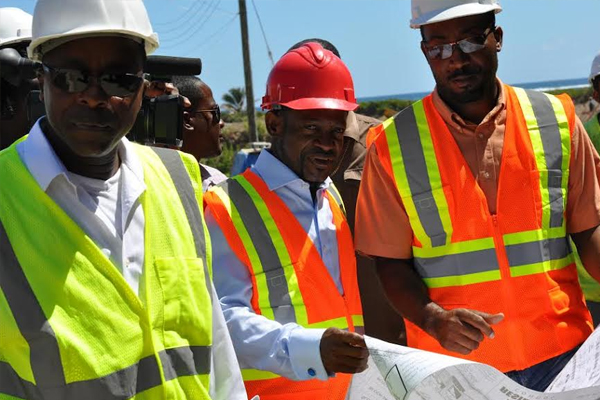 PM pleased with employment opportunities due to investments

Prime Minister Douglas specificially highlighted that despite economic challenges, the Government has ensured that there is employment on all levels.

“Creating employment is vital, especially at a time when we know the world has been in a prolonged recession,” Prime Minister Douglas emphasized. “St. Kitts and Nevis has its own financial and economic challenges and is very much determined to get out of these challenges and grow out of such situations. We believe that there are opportunities for employment – not only in terms of the employment of lower-end workers but at the high end as well. Engineers, construction companies, and everybody is given an opportunity to really improve himself or herself with these types of investments that we are attracting.”

The Leader of the Federation further noted that Tourism itself provides a valuable means of showcasing the two islands as future prospective sites for investment.

“Tourism being the main driver of the economy, presents the opportunity for St. Kitts and Nevis to market itself,” the Prime Minister remarked. “And together with the very successful story of the Citizenship by Investment Programme, overseas investors as well, are encouraged to invest in St. Kitts and Nevis.”

The Prime Minister further elaborated that other key qualities of the Federation as a site for investment are its hardworking and hospitable people and a stable government that provides the necessary incentive packages.

“What we’ve seen is the tremendous response that we’ve had to the PEP,” Prime Minister Douglas noted. “The Government met with the SIDF [Sugar Industry Diversification Fund] – and we said we had to continue this programme. There is no question about it, we have to tailor-make it, make adjustments here and there. For example, when I was walking the site a while ago with the Developer, they said they are now willing to pay 50 percent of the wages of some of the workers who are now in the PEP.

“Why? Because they have been able to transition them from mere labourers to those who are now semi-skilled – and who have in their [the developers] clear analysis, good intentions and the ability to advance and to become skilled.”

The Developer of Imperial Bay Beach and Golf Residences Faron Lawrence also informed the Prime Minister that there was the possibility of paying the full wages of several PEP employees after a period of apprenticeship and training because such persons seemed ready to hold their own in their particular skill.