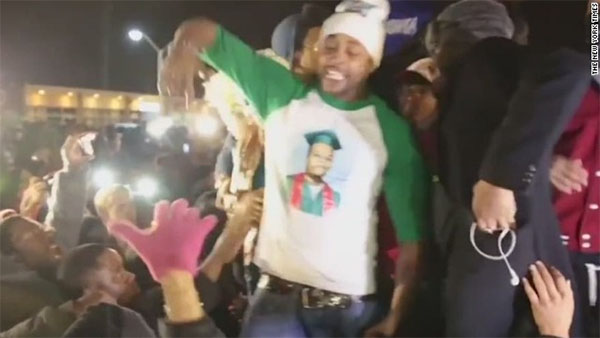 (CNN) — Authorities are formally investigating whether Michael Brown’s stepfather intended to incite a riot last week when he urged a crowd in Ferguson, Missouri, to “Burn this bitch down” after the grand jury’s decision was announced, the city’s police chief said Tuesday.

No charges have been filed against Louis Head in the incident, but police have interviewed people who know Head and who were with him November 24, the day a prosecutor announced that Officer Darren Wilson (who has since resigned) would not be indicted in the August 9 shooting of Michael Brown, Police Chief Tom Jackson said.

Shortly after St. Louis County prosecuting attorney Robert McCulloch’s announcement, Head stood above a crowd of demonstrators — some of them shouting “F— the police!” — and yelled, “Burn this motherf—er down!” and “Burn this bitch down!”

A row of businesses on West Florissant Avenue, a major thoroughfare in the St. Louis suburb, was engulfed in flames. Police cars and vehicles at a nearby dealership were turned into fireballs. There were so many blazes that firefighters couldn’t reach all of them.

Police have not spoken to Head about his actions, but they intend to do so, Jackson said, adding that multiple law enforcement agencies were involved in the investigation.

The police chief told TV and radio host Sean Hannity something similar Monday, but he didn’t classify the probe as formal.

“We are pursuing those comments, and there’s a lot of discussion going on about that right now, but I really can’t get into that at this time,” he said.

“We can’t let all that happened in Ferguson and Dellwood and the community die. Everyone who is responsible for taking away people’s property, their livelihoods, their jobs, their businesses — every single one of them needs to be prosecuted to the fullest extent of the law,” he said.

Brown family attorney Benjamin Crump has previously called Head’s remarks inappropriate but asked the public not to condemn the family for being human. More recently, he told CNN to remember that Brown’s mother and father have repeatedly asked protesters to remain peaceful.

He further called Head’s statements “indefensible” and “not appropriate in any way.”

“We don’t condone people acting on emotion calling for people to do irresponsible things at all,” Crump told CNN. “And so we want his family, his mother and father’s message to come across louder than anybody who might be associated with them. … And they can’t control what others do. They can control what they pray for.”

Others have called for Head’s arrest, including Missouri Lt. Gov. Peter Kinder, who told radio host Laura Ingraham last week “that he should be arrested and charged with inciting to riot.”