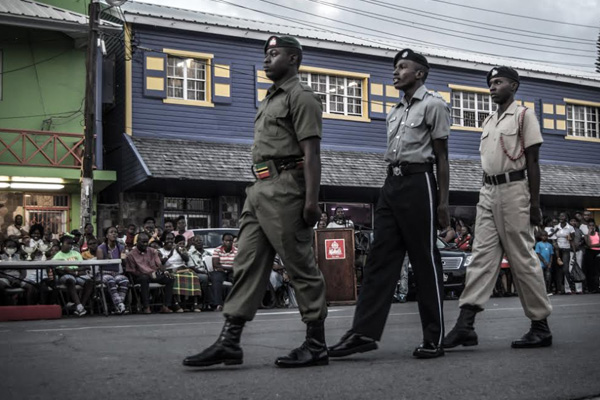 The first round featured an inspection where the individuals were careful scrutinized by a panel of judges. The second round consisted of a group drill with four members receiving 48 commands ranging from salutes, standing at ease and attention, to slow and quick time marching.

There was a bit of suspense at the end as there was a drill off for second place in the Individual Category between Constable Akeem Hendrickson, Private Jamal Wyatt of B Company and Kai’jana Henry of the Cadets.

The final scores in the Individual Category revealed Kai’jana Henry placed third, Akeem Hendrickson was second while Andre Hanley of the Defence Force Band was adjudged winner. As mentioned the Group Category was won by the police. Second place went to Kajali Gumbs and Sherima Stanley of the Customs and Excise and third, Andre Hanley and Brencil Blake of the Defence Force Band.

“We went out and did a great job,” Constable Hendrickson stated, revealing that he volunteered for the team two days ago to replace an ill WPC Maaisha Liburd. But Hendrickson is also suffering from an injury to his left shoulder, sustained eight days ago. “It was really tough to be honest but we pulled it out.”

Constable Rogers said he was proud to represent the agency as it helps to give the public a chance to see police officers in a different role rather than with handcuffs and guns. “I appreciate that even though we are among the newer members of the force, we were chosen for this competition,” he stated, reflecting on their graduation in February of this year. “We are young, only 21 and 22 years old, and we are glad for this exposure to promote the police force.”

The team thanked Superintendant Lionel Moore and Inspector Eldrin Dickenson of the Police Training Complex for their instructions during their training for the force, as well as Sergeant Irvin Bradshaw for encouraging them while they prepared for the drill competition.

Both said drills are important as it helps to keep an individual focussed and fosters discipline. They expressed an interest in travelling overseas to participate in such courses. The constables also stressed a desire to defend the title next year but said if they are not selected they will happily help whoever is chosen.