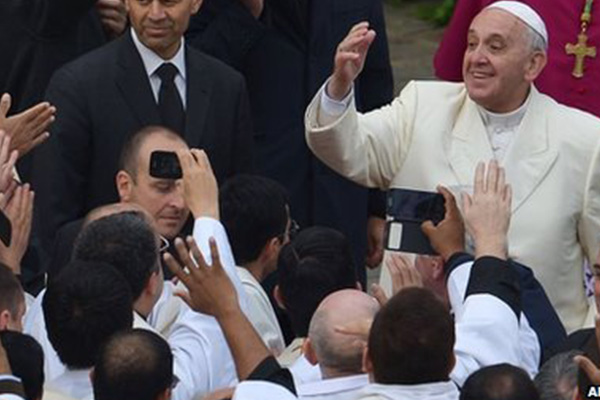 Pope Francis calls for power to move away from Vatican

(BBC)—Pope Francis has called for power in the Catholic Church to be devolved away from the Vatican, in the first major work he has written in the role.

In the document, he says he is open to suggestions to changes in the power of the papacy.

He also warns that rising global economic inequality is bound to explode in conflict.

Since becoming Pope in March, Francis has struck a markedly different tone to his predecessor on several issues.

In his “apostolic exhortation”, Pope Francis said he preferred a Church that was “bruised, hurting and dirty because it has been out on the streets, rather than a Church which is unhealthy from being confined and from clinging to its own security”.

The document suggests major changes are on the way, with Francis noting that the Church has to get over an attitude that says: “We have always done it this way,” the BBC’s David Willey reports from Rome.

It represents an ambitious programme to try to rekindle his church’s missionary zeal, our correspondent says.

However, the document reiterates the Church’s opposition to the ordination of female priests, saying this is “not a question open to discussion”.

The document also touches on inter-faith relations, urging Christians to “embrace with affection and respect Muslim immigrants to our countries in the same way that we hope and ask to be received and respected in countries of Islamic tradition”.