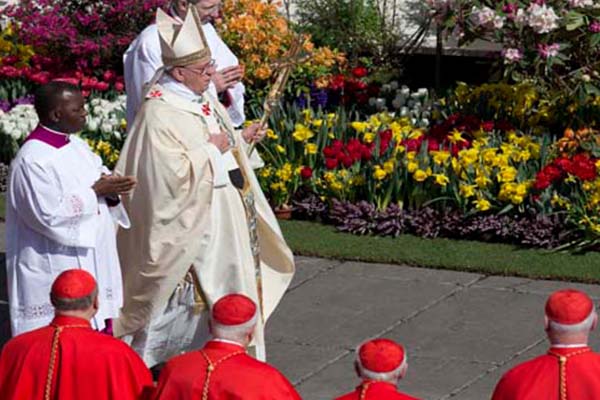 VATICAN CITY (AP) — Marking Christianity’s most hopeful day, Pope Francis made an Easter Sunday plea for peace and dialogue in Ukraine and Syria, for an end to terrorist attacks against Christians in Nigeria and for more attention to the hungry and neediest close to home.<

Well over 150,000 tourists — Romans and pilgrims, young and old — turned out for the Mass that Francis celebrated at an altar set up under a canopy on the steps of St. Peter’s Basilica.

So great were their numbers that they overflowed from sprawling St. Peter’s Square, which was bedecked with row after row of potted daffodils, sprays of blue hyacinths and bunches of white roses. Waving flags from the pope’s native Argentina as well as from Brazil, Mexico, Britain, Poland and many other countries, they also filled the broad boulevard leading from the square to the Tiber River.

Easter is the culmination of Holy Week and marks Christian belief that Jesus rose from the dead after his crucifixion.

Francis noted that this year the Catholic church’s celebration of Easter coincided with that of Orthodox churches, which have many followers in Ukraine.

Francis prayed that God would “enlighten and inspire the initiatives that promote peace in Ukraine, so that all those involved, with the support of the international community, will make every effort to prevent violence.”

In eastern Ukraine, the holiday was marred by a deadly shooting Sunday fueled by tensions between pro-Russian supporters in the east and those loyal to an interim government in Kiev. The clash appeared to defy an international agreement reached last week in hopes of ending months of unrest.

Francis also prayed that all sides in Syria will be moved to “boldly negotiate the peace long awaited and long overdue.” Syria has been wracked by a three-year civil war that has cost 150,000 lives and forced millions to flee the country.

Christians make up about 5 percent of Syria’s population. In comments to mark Easter there, the Greek Orthodox patriarch vowed that Christians there “will not submit” to extremists who attack “our people and holy places.”

Francis makes a pilgrimage to Jordan, the Palestinian territories and Israel next month, so on Easter he prayed that hopes sparked by the resumption of Mideast peace negotiations will be sustained.

Thousands of pilgrims from around the world flocked to the celebrate Easter in the Holy Land, where Christian communities, as well as elsewhere in the Middle East, have been declining as the faithful flee regional turmoil.

Francis also spoke of those suffering in Africa from an epidemic of deadly Ebola and urged a halt to “brutal terrorist attacks” in parts of Nigeria.

Nigerians marked Easter with heightened security against a spreading Islamic uprising, mourning the deaths of 75 bomb blast victims and fearful of the fate of 85 abducted schoolgirls. The homegrown terror network Boko Haram has claimed responsibility for last week’s rush-hour explosion in the capital, Abuja, and threatened more attacks.

In Venezuela, there have been hopes Vatican mediation can help end the country’s violent political unrest, and Francis urged that “hearts be turned to reconciliation and fraternal concord” there.

But Francis’ Easter message also urged people to pay attention to the needy close to home. He said the “good news” of Easter’s joy means “leaving ourselves behind and encountering others, being close to those crushed by life’s troubles, sharing with the needy, standing at the side of the sick, elderly and the outcast.”

He denounced the “scourge of hunger,” which he said was “aggravated by conflicts and by the immense wastefulness for which we are often responsible.”

Francis has set an austere tone in his papacy, forsaking an ornate apostolic palace apartment for a simple guesthouse on the Vatican grounds and rejecting limousines for regular cars.

Cheering and applauding, the crowd tried to catch a glimpse of the pontiff as he circled around in his white popemobile before going to the basilica’s balcony to deliver his commentary.