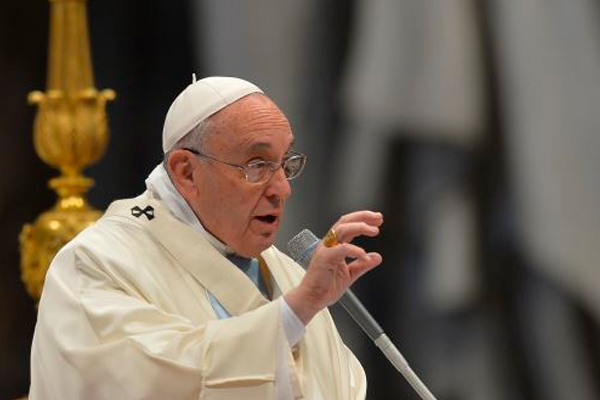 Pope to make historic US Congress address on Sept 24

Washington, United States (AFP) — Pope Francis will bring his message of peace and compassion to politically gridlocked Washington in September when he becomes the first pontiff to address the US Congress, lawmakers said Thursday.

Francis, who is also expected to meet President Barack Obama, will speak before members of the Senate and House of Representatives on September 24 after finally accepting an invitation extended in March last year.

“That day his holiness will be the first pope in our history to address a joint session of Congress,” House Speaker John Boehner told reporters.

“We are humbled that the Holy Father has accepted our invitation and certainly look forward to receiving his message on behalf of the American people.”

The 78-year-old leader of the world’s Roman Catholics confirmed late last year that he would visit the United States in September to take part in a Catholic Church congress in Philadelphia.

He will also address the United Nations in New York.

“I am very much looking forward to welcoming Pope Francis to the United States later this year,” Obama, who was received by the pontiff at the Vatican last March, said at Thursday’s National Prayer Breakfast in Washington.

The pope is hugely popular in the United States, with a Pew poll in December showing 78 percent of Americans have a favourable view of Francis.

House Democratic leader Nancy Pelosi, who like Boehner is Catholic, said lawmakers were “honoured and overjoyed that Pope Francis, the first pontiff born in the Americas, has accepted our invitation.”

The Argentina-born pope has “inspired a new generation of people, regardless of their religious affiliation, to be instruments of peace,” she added.

US lawmakers could do with some timely peace-building.

Republicans and Democrats have feuded over immigration, a Canada-US oil pipeline and national security funding virtually from the moment the new Congress convened in January.

And Obama’s $4 trillion budget request for fiscal year 2016, defended by Democrats, has been dismissed by Republican opponents as a tax-and-spend wish list that will never pass Congress.

“On a happier note, a bit of good news,” Boehner said as he announced the pope’s visit, moments after highlighting the congressional gridlock.

The pope is a popular figure on Capitol Hill, where nearly one in three lawmakers is Catholic.

“In a place too often torn by political division, his words are certain to enrich and enlighten,” senior Senate Democrat Dick Durbin said.

Francis has touched on issues like climate change that remain deeply divisive in Congress, where many Republicans hesitate to openly accept scientific assessments that human activity has led to global warming.

Francis announced last month, as he returned to Rome from a week-long trip to Asia, that he will make his first visit to Africa later this year, with stops in Uganda and Central African Republic.

He is also scheduled to travel to Ecuador, Bolivia and Paraguay in July.

The outspoken Francis caused a stir last month when he told reporters on the papal plane that Catholics should not breed “like rabbits”.

He rowed back from the remarks days later, describing large families as a “gift from God”.