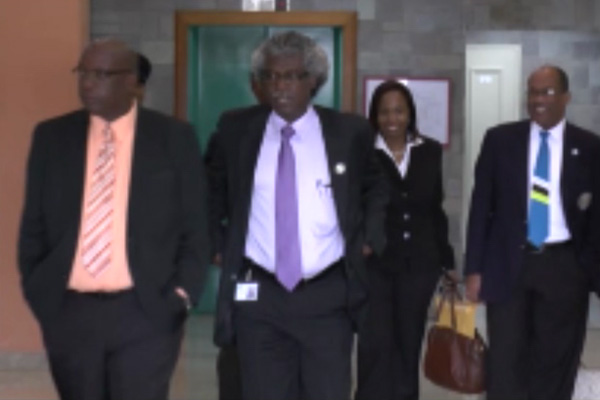 While there, the Prime Minister held discussions with the Governor of the financial institution, Sir K. Dwight Venner.

Prime Minister Harris spoke to the media after the meeting and explained the purpose of the visit.

He said, “This is my first encounter with the Central Bank since I’ve been sworn in as the Prime Minister of the country. This is part of the updating of the knowledge base with respect to the financial development within the OECS. I want therefore to thank the Governor for providing me this quick opportunity and to get a sense of where we are at, get a sense of where St. Kitts and Nevis is in terms of the OECS Currency Union.”

Sir Dwight said he was able to update the Prime Minister on next week’s meeting of the Monetary Council.

“We have a very important meeting on Tuesday; the Monetary Council; it will be the Prime Minister’s first meeting. He’s not unfamiliar with that, he’s sat on the Council before which is good and so we were discussing the agenda and the critical points that will come up and so we are not at liberty to say that before the meeting,” the ECCB Governor explained.

Dr. Harris noted that his recent meetings fall under his government’s plan of moving the country forward.

“Democracy is always the best way of life and our democracy had been tested during this last election. In the end, I think we have vindicated ourselves as a people who love democracy, who love freedom and we are now about the challenges of governance. We want to move on, we believe we have an agenda that could redound to the prosperity of all people and we are looking forward to working with all stakeholders and the ECCB is perhaps one of the most important in achieving desirable benefits for the good people of St. Kitts and Nevis,” he said.

Also present during the Prime Minister’s visit to ECCB was the Premier and Minister of Finance on Nevis, Hon. Vance Amory.