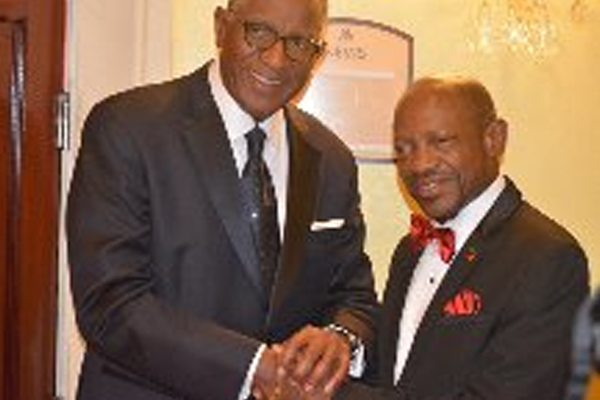 Charlestown, Nevis — Former premier of Nevis and leader of the Nevis Reformation Party (NRP) the Hon. Joseph Parry, other members of the NRP executive and a host of NRP supporters joined hundreds at the 14th Annual Prime Minister’s Gala at the St. Kitts Marriott on Saturday, Jan.3rd.

“It was a night of great connection and togetherness at a high-level function for persons of St. Kitts and Nevis at home, and returning nationals.”

Organizers put the attendees at well over 700.

During the much-anticipated speech by the Prime Minister the Rt. Hon. Dr. Denzil Douglas, the nation’s leader thanked Hon. Parry for attending the event and for working with him towards a better, more progressive and economically stable St. Kitts and Nevis, both while in government and through the Contract for Progress which was signed on Dec. 18, 2014.

Earlier in the day, the Prime Minister also hosted a joint Labour comrades and NRP souljahs luncheon at the same venue where over 500 supporters enjoyed a tasty lunch and entertainment by KC -5. The ceremony was chaired by Jamaican comedian Blackka and Mrs. Etsu Bradshaw-Caines, daughter of late premier and first national hero, Mr. Robert Bradshaw.

One of the highlights of the luncheon came when Prime Minister Douglas said during his toast, “I am declaring that all 11 seats will be for the Labour/NRP in the upcoming elections!” The announcement was greeted by a thunderous applause.