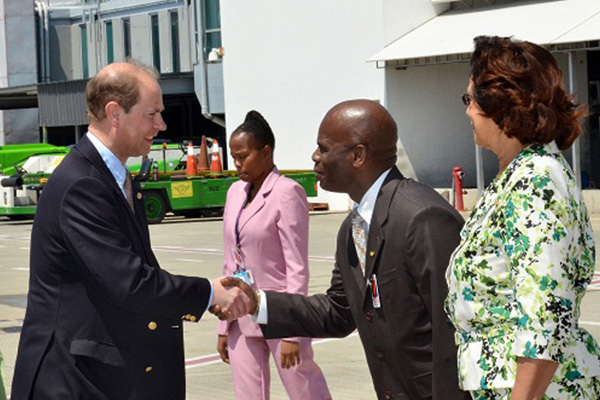 Prince Edward and Countess in Jamaica for working visit

KINGSTON, Jamaica (JIS) — His Royal Highness, Prince Edward, Earl of Wessex and Her Royal Highness the Countess of Wessex arrived in the island Sunday (March 2), for a four-day working visit.

After being escorted to the airport’s VIP lounge for a brief private session, Their Royal Highnesses were taken to the Caymanas Golf and Country Club in St Catherine for the Duke of Edinburgh Cup Golf Tournament, reception, lunch and prize giving ceremony.

During their stay in Jamaica, Their Royal Highnesses will participate in activities related to the Duke of Edinburgh Award.

The Board is chaired by Professor Derrick McKoy, of the University of the West Indies (UWI), Mona.

The Duke of Edinburgh’s Award is the world’s leading achievement award for young people, bringing together practical experiences and life skills to create committed global citizens and equipping young people.

It is awarded to young people between the ages of 12 and 24, who learn to work as a team. They are also required to complete activities in four areas for a specified period, including an adventurous expedition, skills and physical recreation.

The Award was founded in 1956 by His Royal Highness, the Duke of Edinburgh, and now operates in 144 countries, including Jamaica. Since its inception, over seven million persons around the world have participated in the Award.

Some of the other activities that their Royal Highnesses will participate in during the visit include: a courtesy call on the Governor-General, Sir Patrick Allen, who is also  Patron of the Award in Jamaica; tours of the UWI Sports Medicine Facility, the University of Technology (UTech), and the Bustamante Hospital for Children and the Bustamante Museum.

Their Royal Highnesses are expected to depart the island on March 5.