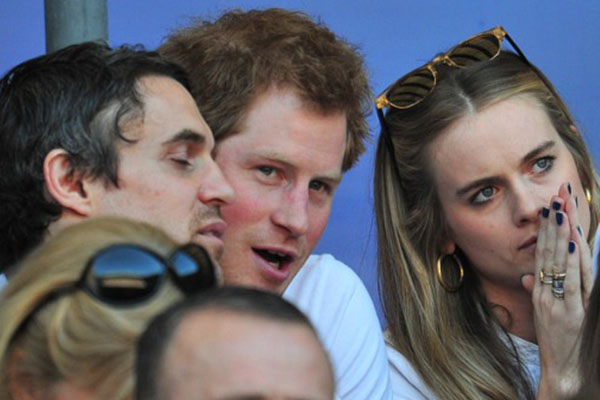 The two had been widely tipped to marry in the next big royal wedding. Speculation became feverish after they appeared at their first official appearance together last month, kissing and hugging at a charity event at London’s Wembley Arena.

Harry, fourth in the line to the British throne, and Bonas had been spotted several times on private dates in paparazzi shots that appeared in British newspapers. A source close to the couple told CNN they remain “best of friends.”

One reason for the breakup is that Bonas, at the age of 25, had her own ambitions that were increasingly being overshadowed by her high profile relationship. She recently completed a one-year contemporary dance course at the Trinity Laban Conservatoire in London and now has a marketing job.

She never seemed comfortable with all the attention that came with being linked to one of the world’s most eligible bachelors. Rumors of marriage had heaped pressure on Bonas, and prompted an increasing amount of media intrusion into her personal life.

Harry, in previous interviews, has raised the question of who would want to take on such a high profile boyfriend. People have often scoffed at the notion, filling up social media with marriage proposals for the Prince, but in some way he may now feel vindicated. They will both hope that by separating they will end the media interest in Bonas and give her the privacy she wants to pursue a career in her own right.

Harry was introduced to Bonas by his cousin, Princess Eugenie. Bonas’ mother is socialite and 1960s “It Girl” Lady Mary-Gaye Georgina Lorna Curzon.

It’s worth noting that the Duke and Duchess of Cambridge also split up at one point in their twenties, prompting speculation that Harry and Bonas could get back together in the future, if things settle down and they both feel ready.

Harry is reportedly heading to Memphis this weekend for the marriage of his close friend Guy Pelley to hotel heiress Elizabeth Wilson. He’ll be hoping to keep a lower profile on this trip — on his last private visit to the U.S. as a single man, he was caught on camera stripping at a party in Las Vegas.