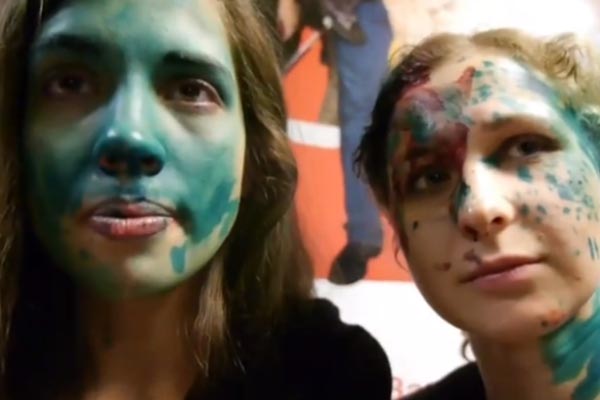 (CNN) — Two members of the dissident Russian punk band Pussy Riot were attacked by a group of men while eating breakfast at a McDonald’s restaurant in a Russian city on Thursday.

The unidentified men threw trash and squirted paint at the two band members, Nadezhda Tolokonnikova and Maria Alyokhina, in the city of Nizhny Novgorod, about 400 kilometers (250 miles) east of Moscow.

The band members posted a video of the attack online, which left them with paint smeared over their faces.

The video shows a group of about six men assaulting the women, who are seated at a table. The men shout obscenities and tell the women to get out of the city and go to America. Tolokonnikova cries out at one point, stumbling away from the table holding her face.

Pussy Riot gained international attention in 2012 after members of the band were arrested for performing an expletive-ridden song denouncing Russian President Vladimir Putin in a Russian Orthodox cathedral in Moscow.

Tolokonnikova and Alyokhina, who both have young children, were sent to prison after being convicted of hooliganism and inciting religious hatred. Russian authorities freed the pair in December.

Several other high-profile critics of the Russian government were released ahead of the Winter Olympics, which took place in the resort of Sochi last month.

Nearly two years in prison failed to silence Tolokonnikova and Alyokhina. After their release, they immediately resumed their denunciations of the Kremlin, as well as the conditions that inmates endure in Russian prisons.

Their continued activism has kept them in conflict with Russian authorities.

They went to Sochi during the Olympics to voice their concerns. While there, they were briefly detained by police and beaten by a group of Cossacks.

In the video of Thursday’s attack, Tolokonnikova and Alyokhina said they had gone to Nizhny Novgorod because they heard of prisoners’ rights being violated there and wanted to help.