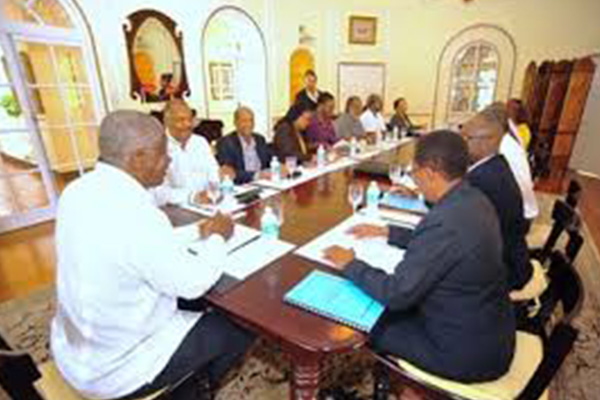 Reparations high on the agenda for CARICOM

Bridgetown, Barbados (BGIS) — Barbados and other Caribbean Community (CARICOM) states are mapping out a legal and strategic plan of action that is designed to persuade slave-trading European nations to “come to the table” and begin the discussion on reparations.

This was stated by Barbados Prime Minister Freundel Stuart, as he met with the chair of the Regional Reparations Commission, Professor Sir Hilary Beckles, senior CARICOM officials, and senior Barbados government officials recently to receive a full briefing from the Commission and the Secretariat on the work of the Commission up to the present.

Stuart was elected to chair the Prime Ministerial Committee on Reparations at the 34th regular meeting of CARICOM heads of government last July in Trinidad and Tobago.

The issue of reparations was tabled by prime minister of St Vincent and the Grenadines, Dr Ralph Gonsalves, and endorsed by other leaders at the summit, with member states mandated to establish their own national committees on reparations. Barbados’ national reparations committee is headed by Professor Pedro Welch, dean of the Faculty of Humanities at the Cave Hill Campus.

Stuart noted that, following the first meeting of the Commission in St Vincent and the Grenadines, when Sir Hilary Beckles was elected as chairman, “significant progress had been made”.

He said that the National Committees on Reparations have been mandated to establish the moral, ethical and legal case for the payment of reparations by the former colonising European countries to the nations and people of the Caribbean Community, for native genocide, the transatlantic slave trade and a racist system of chattel slavery.

In his remarks, Sir Hilary noted that CARICOM states proposed to invite the European nations that were involved in the slave trade to a summit to discuss the legacies of “these crimes against humanity that continue to haunt our developmental efforts”.

He added that it was agreed to have a meeting with the former slave-trading nations in “the usual climate of diplomacy, and reconciliation”. He said this was important in “the search for a new development paradigm for the region”.

“The path to justice, in the context of intergovernmental dialogue should take place in a conciliatory fashion… to strengthen the relationships between the Caribbean and the governments of Europe,” he maintained.

The first regional conference on reparations and the first meeting of the CARICOM Reparations Commission, took place in St Vincent and the Grenadines from September 15-17, last year. The second meeting was held in Barbados on January 27-28 to come up with a regional strategy and budget.