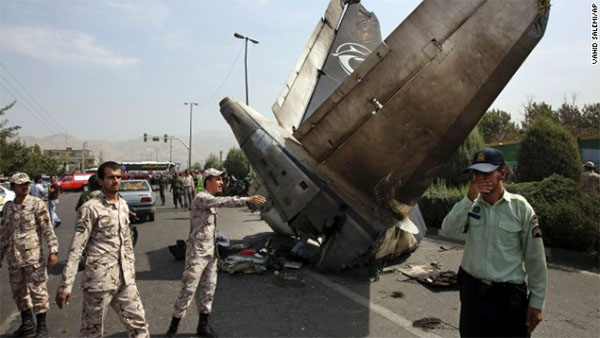 Reports: At least 39 die in passenger plane crash in Tehran

Tehran (CNN) — A passenger plane crashed in Tehran on Sunday, killing at least 39 people on board, official news agencies in Iran reported.

The Antonov-140 propeller plane went down shortly after leaving the runway at Mehrabad International Airport after an engine failed, the FARS semiofficial news agency reported.

Sepahan Airlines Flight 5915 was carrying 40 passengers and a crew of eight when it went down, according to official news reports.

Though the Islamic Republic News Agency and Tehran Times initially said that all crew and passengers were killed, Press TV reported 37 people died in the crash, two more died at a Tehran hospital and nine others were in critical condition with serious burns.

IRNA later said that 40 people had been killed.

The crash also injured people on the ground, including employees at a glass factory, FARS said.

Some of the injured suffered severe burns, Tasnimnews reported.

A witness told FARS that the tail of the plane fell from the sky first, and the front of the plane crashed farther away.