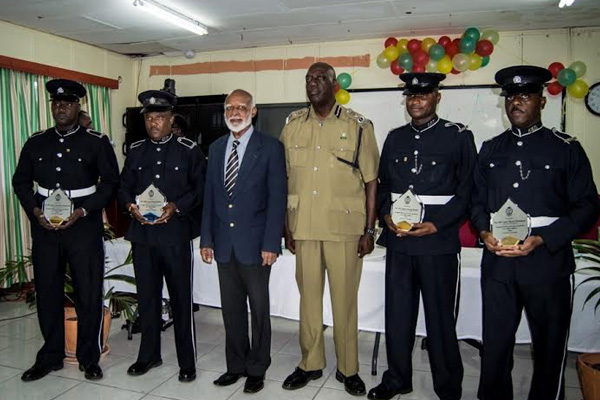 Basseterre, St. Kitts (SKNIS): Seven police officers were recognized for twenty years of service to the nation at an award ceremony on Friday, November 14 at the Police Training Complex.

Constable Mark Handley, who is also the President of the Police Welfare Association, noted that the country has undergone a number of changes over the twenty year period and has established a positive reputation in the global arena particularly through sports and tourism.

Cognizant of the new challenges that development brings, Handley said he and the other officers remain committed to serving the public and ensuring that the Federation is safe for residents and visitors.

Commissioner of the Royal St. Christopher and Nevis Police Force Celvin G. Walwyn said the experience of the officers surpasses more than 100 years in law enforcement when combined.

“They all know what it takes to be a police officer in this Federation and they are the example of what all of us should try to be in terms of longevity in law enforcement,” he said. “I want to congratulate all of the awardees … and I want to thank you for your service to this Federation and to this police force.”

The awards were presented by the Governor General and the Commissioner of Police. Apologies were made for Sergeant Godwin, as well as Constables Ian Hanley and Dorset who were unable to attend the ceremony.