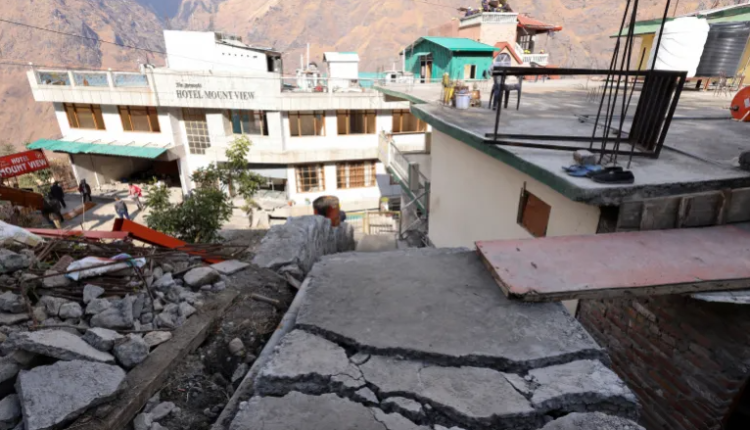 January 13, 2023 (AlJezeera) — Farmer Shiv Lal barely slept this week, overcome by worry about the deep cracks scarring his land and hundreds of other homes and buildings in a sinking town in India’s Himalayas.

On January 2 and 3, Lal and other residents of Joshimath in northern Uttarakhand state woke to find large cracks running through their walls and floors. Outside, roads and walkways had caved in and cracked as the land beneath them shifted.

“I’ve moved my grandchildren and wife to the nearby school because our home isn’t safe,” Lal told the Thomson Reuters Foundation as he stood outside the abandoned house on his plot, which he visits every day and longs to return to.

Like many others in the town, which lies more than 6,000 feet (1,800 metres) above sea level, Lal blames the damage on a hotel construction boom and tunnelling for a nearby hydroelectric project being built by India’s state-run power utility NTPC.

“What have we gained from this NTPC project or tourism? I don’t know if I have eaten or slept in days,” he said.

India has been striving to boost its hydropower production to help meet a target for an overall clean energy capacity of 500 gigawatts (GW) by 2030. Hydropower currently accounts for about 13 percent, or 47 GW, of the country’s total power generation capacity.

While NTPC officials and some geologists have ruled out tunnelling work as the cause of this month’s devastation in Joshimath, residents’ angry protests have reignited debate about the construction of hydropower projects in Himalayan areas.

Uttarakhand, which is prone to flash floods and landslides, has more than 10 operational hydropower projects, with another 75 being built – among them NTPC’s Tapovan-Vishnugad plant – officials at the state’s renewable energy department said.

Environmentalists have said that Joshimath’s woes should prompt a rethink about building more new plants in mountain areas.

“Ninety percent of this problem is because of hydropower projects. The tunnel-making process has created havoc,” said Anjal Prakash, research director of the Bharati Institute of Public Policy at the Hyderabad-based Indian School of Business.

“India needs to do rethink and hydropower projects in the Himalayan region should be stopped,” said Prakash, who is also an author of the Intergovernmental Panel on Climate Change reports in 2019 and 2022.

Experts have warned for years that large-scale construction work, including hydropower projects, in and around Joshimath could lead to land subsidence – the sinking or settling of the ground surface.

Piyoosh Rautela, executive director of Uttarakhand Disaster Mitigation and management, said this month’s incident was likely to have been caused by an aquifer that had breached, adding that the reasons for the breach were being investigated.

Joshimath is located on a hill slope, and sits on the debris of old landslides.

The small town is the gateway to revered Hindu and Sikh shrines and a popular pit-stop for trekkers and skiers drawn to nearby slopes when it snows, fuelling construction activity.

Until this month, bulldozers were being used to widen the road to the town to improve access. Following the protests of recent weeks, the roadworks were halted.

Officials and geologists examining the damage in Joshimath think the 2021 flash floods that washed away the Rishiganga mini-hydropower project and killed nearly 200 people – were the trigger to Joshimath’s present-day troubles.

“Reports of cracks in homes started then,” said Swapnamita Choudhury Vaideswaran, a scientist with the Dehradun-based Wadia Institute of Himalayan Geology, a research organisation.

Vaideswaran, also a member of the state’s expert committee examining the scale of damage, said the NTPC tunnel was too far away to be responsible for the cracks.

Started in 2008, the 520-megawatt Tapovan-Vishnugad Hydropower Plant on the Dhaulganga River is likely to be completed within a year, officials said.

NTPC officials said rampant construction activity in Joshimath had caused the subsidence, not the tunnel they were constructing, which was more than a kilometre (0.62 miles) away from the edge of the town, and ran far below the surface.

“Tunnels in cities for metro trains are only a few metres from the surface and do not cause any harm to the buildings. This is about a kilometre deep,” said one official, requesting anonymity as he was not authorised to speak to the media.

They have also denied causing any damage to water systems in the area.

Videos of construction and ongoing digging for the project – despite instructions from the government to halt all work – are doing the rounds on residents’ WhatsApp groups, fuelling anger.

Officials said the work had stopped for now but the project would continue.

“The project is on. We don’t have any connection to the ongoing problem,” the official said, adding the project had created 1,100 contractual jobs, mostly among locals.

Shiv Lal’s nephew got a plumbing job at the hydropower plant, but it was a short-lived role, he said. EXODUS Local authorities have moved about 170 families to lodges, hotels, schools and the city council building for safety, marking 128 of about 4,500 buildings with a red cross, indicating they are unsafe to inhabit.

Two hotels that had developed cracks are being demolished to avert the risk of their possible collapse, officials said.

Families that own the crumbling properties have shifted the elderly, women and children to villages or towns where they have relatives, while the men have stayed back to negotiate compensation with the district administration.

Scientific teams have fanned out across Joshimath to study the structural stability of houses, assessing damage and investigating the source of a gush of muddy water pouring out of a drain since the cracks appeared.

Himanshu Khurana, the administrative head of Chamoli district where Joshimath is located, said land was being identified nearby and its safety vetted by experts to relocate people.

That is unlikely to placate residents whose homes are no longer safe, however.

“We cannot be herded like animals to some land. We want a one-time settlement,” said folk singer Darwan Naithwal, 56, who left his three-storey home to live in a hotel last week after he failed to seal the cracks on his walls with cement.

Meanwhile, mini trucks loaded with mattresses, washing machines and school bags lined the lanes of the town this week as more families got ready to leave.

“We rented out four rooms in Joshimath that paid for our children’s education. Now, we will go to our village. I don’t know what lies ahead,” said Rajni Rawat, standing in a municipal room being used as a shelter, her belongings stacked beside her.

Many property owners living in shelters return to their homes every day to assess the damage or simply try to come to terms with their losses.

Rishi Devi, 50, wiped away a tear outside her home as she recalled entering it as a new bride.

“This is our ancestral home, and now it’s gone,” she said, showing the rooms in ruins, with beams falling off and cracks uprooting the house from its foundation.

Among debris and falling walls, the condemned houses of Joshimath have the air of a ghost town. A jacket hangs on a nail, a poster welcomes guests, and handprints in yellow turmeric paste recall a recent celebration.

“I keep going to the school shelter and coming back,” Lal said. “Last night, I managed to lie down at 4 am when I felt it was safe to close my eyes for a bit. All I want is to continue living here.”