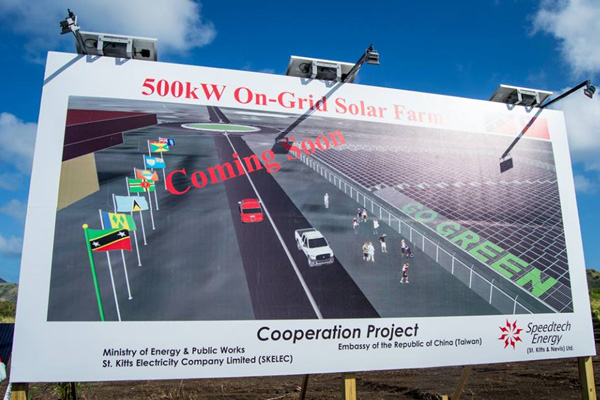 Basseterre, St. Kitts (SKNIS) — St Kitts continues to break new ground in its efforts to reduce its carbon footprint, reduce fossil fuel consumption and expand its usage of renewable energy, with the opening of the first half of a one-megawatt solar farm today (January 08).

Prime Minister and Minister with Responsibility for Sustainable Development The Right Honorable Dr. Denzil Douglas, said this initiative supports the government’s firm and steady move toward energy security and will not only free the nation from dependability on fuel, but will have a tremendous impact on future generations.

“This development that is taking place with regard to renewable energy is this government’s way of showing that it has broken oil’s 100 percent hold on our economy…In St. Kitts and Nevis, we no longer will read of how renewable energy can change the economic and developmental prospects of a nation. We will be able to demonstrate it here.”

Permanent Secretary in the Ministry of Energy and Public Utilities, Lenrick Lake said that in the last five years, St. Kitts and Nevis has done more in renewable energy than the rest of the countries in the Organization of Eastern Caribbean States (OECS) combined, and that this is part of the government’s plan to make St. Kitts and Nevis the smallest green nation in the western hemisphere.

The 90 X 90 square meter farm, located at the field adjacent to the Eastern Caribbean Central Bank, will be capable of transferring up to 500 kilowatts of energy to the national grid, saving an expected forty-thousand gallons of fuel per annum. CEO of the St. Kitts Electricity Company (SKELEC) Ltd, Cartwright Farrell said the solar farm will have a significant impact on the way energy is used in the country and result in massive savings for consumers.

The solar farm, which at the end of the project will be owned and operated by SKELEC, is being overseen and constructed by energy technology company Speedtech, as part of a cooperation between the Embassy of the Republic of China (Taiwan), SKELEC and the Ministry of Energy and Public Utilities.

The Republic of China (Taiwan) Resident Ambassador to the Federation of St. Kitts and Nevis, His Excellency Miguel Tsao, said that his country is proud to be part of the federation’s goal in going green and will continue to lend its support.

The solar panels have a life expectancy of 20-25 years and will soon be followed by a second farm built in the countryside, which will total a one-megawatt input into the national grid.