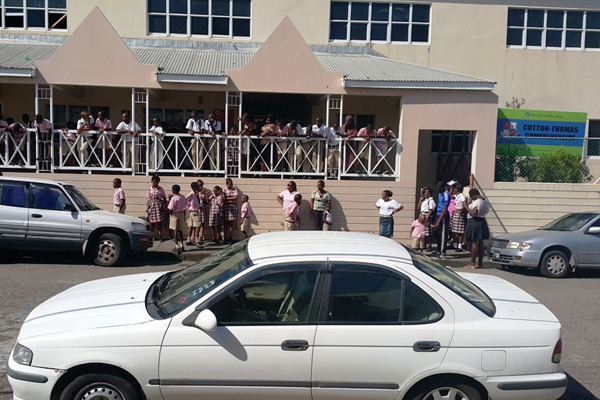 Basseterre, St. Kitts (SKNIS) — The St. Kitts and Nevis Fire and Rescue Services (SKNFRS) is commemorating 15 years since its separation from the Royal St. Christopher and Nevis Police Force (RSCNPF) in January 2000.

A week of activities which, commenced on Sunday, January 4 has been planned to celebrate the crystal anniversary, under the theme: “Moving Forward Professionally with Vision and Togetherness to Provide a Safer Community.”

Fire Station Officer attached to the Nevis Division, Abdias Samuel said that the activities began with a church service and were planned with the general public in mind.

“On Tuesday, an open day was held for the general public to see what Fire Officers do on a day – to – day basis,” Samuel said, adding that the aim of this day was to have the public interact with the officers and get a different perspective as to their roles, functions and responsibilities are.

“In St. Kitts a number of schools visited the Fire Stations to observe the open day,” Samuel stated. “The day started out slow but eventually the pace picked up. We had other people visiting us including fire-fighters from the United States who were aboard the cruise ships that docked. They were amazed with the open day and as such participated.”

The Fire Station Officer explained the events that took place on both islands on Wednesday, January 7.

“A community day was held in Nevis where officers visited the gravesides of fallen former fire officers Mr. Nathaniel Nisbett and Mr. Patrick Lawrence, he explained. “Wreaths were laid by family members and officers.

St. Kitts Fire Services Department and the police battled it out on the cricket field in a 20/20 match to see who would be victorious.”

One of the highlights of the week of activities is the drill display, where officers on both islands will demonstrate their skills and agility.

“A drill display is scheduled for Friday, January 9, 2015 on both islands,” he said. “It will be held in St. Kitts on the Bay Road on the vicinity of Rams Supermarket and in Nevis in the area of Dr. Walwyn Plaza in Charlestown. These activities will commence at 10:00 a.m in Nevis and 1:30 p.m. in St. Kitts.”

The week of activities culminates with a family fun day on Sunday, January 11 at Cockle Shell Bay in St. Kitts and Sand Crab Hole Beach in Newcastle.