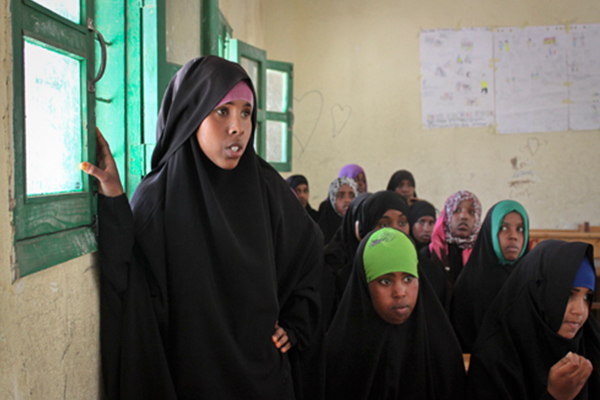 HARGEISA, Somalia (AP) — The 30 Somali teenagers — both boys and girls — all agreed: Female genital mutilation is harmful and the practice should be abandoned. But what they really meant, they revealed moments later, is that girls should have their genitalia cut — just not sewn shut.

“It’s our tradition and if the girls are not subjected to suna(cutting) she will not be accepted for marriage,” said Asthma Ibrahim Jabril, 17.

The students, who are part of an afterschool club in Somaliland which the U.N. children’s agency helps fund, discuss issues like child labor, early marriage, and female genital mutilation in a classroom with several large hearts scrawled along the walls.

UNICEF is weaving a delicate campaign to educate communities in Somaliland about the harms of female genital mutilation and to get leaders, who are meeting there this month to debate the practice, to denounce it. Child rights advocates in nearly 30 countries are fighting to reduce the number of girls subjected to the cutting of their genitalia, a practice that goes back thousands of years and that Somali practitioners often link to Islamic requirements.

All 15 girls sitting opposite the boys at Sheik Nuur Primary school have undergone suna_the removal of the clitoris and the labia minora. They all said it was the right thing to do.

Female genital mutilation comes in many different forms. The other form known by the Somali teens is sewing the vagina shut until marriage. Everyone agreed that this should be ended.

“I want it to be eradicated. It’s an old tradition,” said Ikram Ismail, a confident 18-year-old in a pink headscarf and a black hijab. “When my mother was young no one could speak about it publicly, but now people understand that it causes a lot of harm so that’s why we talk about it.”

Female genital mutilation can cause severe bleeding and problems with urination, cysts, infections, infertility and complications with childbirth, including an increased risk of newborn death. More than 125 million girls and women alive today have been cut in 29 African and Middle Eastern countries, the World Health Organization says.

In Somalia, the cultural expectation for girls to undergo genital mutilation comes down to sex and marriage. Men expect to marry a virgin. If a girl has not undergone female genital mutilation, she is considered unclean.

“It’s that she is not pure,” said Charity Kinya Koronya, a child protection officer for UNICEF who was raised in a community in Kenya where young girls undergo genital mutilation. Her father would not allow the procedure to be done on her.

“You are stitched and not opened up until the day of your marriage,” Koronya continued. “They say someone who is open, anyone can go in.”

Last month about 60 religious and civic leaders in the capital of Somaliland — a semi-autonomous region in northern Somalia that has remained largely peaceful during Somalia’s decades of conflict — attended a daylong seminar and debate on female genital mutilation.

Sheik Khalil Abdulai Ahmed, the government minister of religious affairs, told the room that female genital mutilation can lead to death, pain and mental issues. Amina Mohamed Jirde, the wife of Somaliland’s president, pleaded with the group to stop genital mutilation. “This practice is not good for the girl,” Jirde said. “It is good for you to marry all the girls without discrimination.”

Officials with UNICEF tried to underscore that they do not believe female genital mutilation is required by Islam, though it is not strictly practiced by Muslims. Haydar Nasser, a UNICEF official who is Iraqi by birth but now a Canadian citizen, told the leaders that they were following a custom first practiced by the Egyptians some 6,000 years ago, long before Islam was founded.

“So the question to you to discuss today is why as a Muslim practice do you employ a pharaoh practice, pharaohs who went to hell because they are kaffirs,” he said, using the Arabic word for someone who doesn’t believe in Islam.

Islam’s holy book, he continued, says that human beings are created perfectly. “So if a human is in a perfect way, why do we practice something that” alters the body, he said.

At a small community center made of metal sheeting in one of Hargeisa’s lower income communities, two dozen women and girls, who have been in an education program run by aid group Tostan, and supported by UNICEF, spoke about their views on the practice.

Amran Mohamud, 40, spent 15 years cutting girls. She remembers the girls who wouldn’t stop bleeding. She remembers the infections that set in. After she began attending Tostan classes four years ago, she abandoned the trade, a profession she learned from her mother that paid between $30 and $50 per procedure.

Mohamud carried out the cutting procedure on her oldest daughter. But her granddaughters will not have it done. Mohamud said even her mother is against the practice now.

“I reminded her of the problems we’ve seen,” Mohamud said.

An imam from the small community in Hargeisa, Mohamed Said Mahmood, 54, said the world is changing. “There are men willing to get married to uncut girls,” he said, while acknowledging not all men his age back his viewpoint.

At the end of the daylong meeting that UNICEF had hoped would end in a decision to abandon female genital mutilation, the religious leaders — including the minister of religious affairs — say they cannot agree to abandon suna. The practice of female genital cutting will continue.