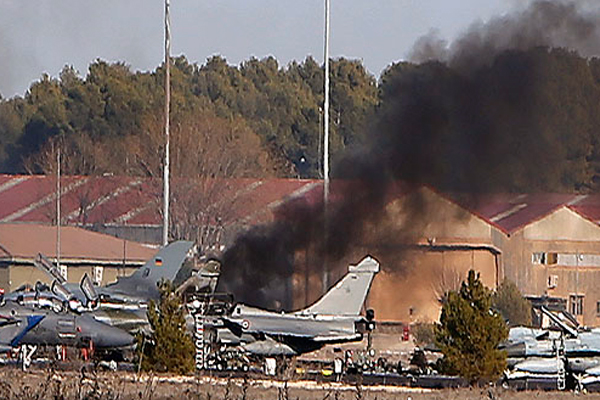 Another 21 people were injured in the incident at the Los Llanos base, which sent flames and a plume of black smoke billowing into the air, the Spanish Defense Ministry said in a statement.

Rajoy told Spain’s Telecinco news program in an interview Monday night that eight of the dead were French and two were Greek. Eleven of the injured were Italian and 10 were French, he said.

Five of those hurt suffered severe burns and were transported to a Madrid hospital for treatment, and the rest were undergoing treatment in the city of Albacete near the base, the Defense Ministry said.

The two-seat jet was taking off but lost thrust and crashed into an area of the base where other aircraft involved in the NATO exercise were parked, the Spanish Defense Ministry said. At least five jets were damaged and a statement from Italy’s defense ministry said “numerous” helicopters were damaged.

The Spanish ministry said the jet that crashed was taking part in a NATO training exercise called the Tactical Leadership Program.

According to a U.S. Air Force website, TLP was formed in 1978 by NATO’s Central Region air forces to advance their tactical capabilities and produce tactics, techniques and procedures that improve multi-national tactical air operations.

The 10 NATO countries participating in the program are Belgium, Britain, Denmark, France, Germany, Greece, Italy, the Netherlands, Spain and the United States.

The first TLP course took place at Germany’s Fuerstenfeldbruck Air Base. It has been held at the Spanish base about a two and a half hour drive from Madrid since June 2009.