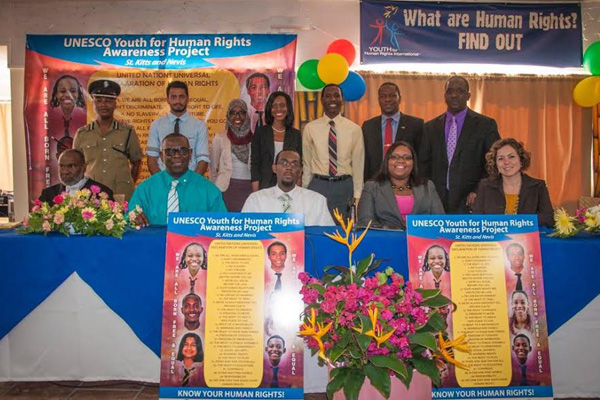 NATCOM (SKN) Basseterre — Outstanding at the launch of the UNESCO Youth for Human Rights Awareness Project was the fact that youth from all strata of society attended to represent their various groups and interests, boding well for the future development of the project.

Representatives of the Rastafarian Community, legal profession, persons with disabilities as well as the Hispanic, African and Guyanese communities were just some of the young persons attending the event on Thursday November 20 and presenting their concerns and hopes for the future of the Youth for Human Rights Agenda..
Highlighted at the event was the fact that Human Rights are often taken for granted and in many cases are not even known by individuals. However, according to the Director of the Youth Department in Nevis Zahnela Claxton who delivered the project overview, this is about to change as there is a concerted effort to raise awareness among youths locally.

“The St. Kitts- Nevis National Commission for UNESCO supports the view that educating the youths and raising awareness of human rights via the human rights framework has the potential to effect social change in every segment of our society”. Ms. Claxton cited several hindrances to the full enjoyment of Human Rights including socio-economic background, educational background, and the perception of their political affiliation, cultural background and disabilities.”
Expounding on the project Ms. Claxton explained that it would support the youths in their development to become more cognizant of their rights. The target audience includes youths between the ages of 12 and 35 including those incarcerated at her majesty’s prison.

The goal is to be achieved by conducting workshops and seminars on both St. Kitts and Nevis starting early next year. The activities for these workshops and seminars will include video presentations in communities, murals across rural and urban areas depicting Human Rights, public service announcements, flyers and billboards. Upon culmination of the project a Youth for Human Rights Club will be established for continued networking among youths in the Federation. There will also be and a Youth for Human Rights Booklet.

Commenting on the practicality of the Youth for Human Rights, Ms. Traci Parker, Coordinator for the International Organization, explained that the project will make accessible an educator kit which is to assist teachers in educating students about their Human Rights.

Ms. Parker said, this being an audio-visual world, the kit contain a DVD which comprises videos describing various Human Rights as well as supplementary materials and lesson plans which teachers can use as a guide, making it easy for them to relay the information.

“Our goal with regards to Human Rights is to simplify it and make it a available for young people so that all people of this planet could grow up knowing their Human Rights, especially as they are actualized in the communities, neighbourhoods, classrooms, groups, friendships, workplaces and the smallest spaces of human existence.” she said.

When a young member of the Rastafarian Community sought to clarify his rights with regards to assembling, he was advised that to be guided by the law of the land as to whether they had a right to gather and could be supported according to the Human Rights agenda.

Another concern raised at the launch regarding the rights of persons with disabilities was also addressed by stating that the very nature of the project speaks to full inclusion of every human being regardless of their physical abilities. The audience at the ceremony was reminded as well that they could be active participants in the Human Rights Group that would be launched in the near future.

An additional advantage for the young people involved in the Youth for Human Rights Project was given by featured speaker Dr. Henry Browne Q.C., who explained that the protection of Human Rights is inherent in the Constitution of St. Christopher and Nevis. Hence the project was launched successfully setting the stage for its full implementation in the ensuing year.