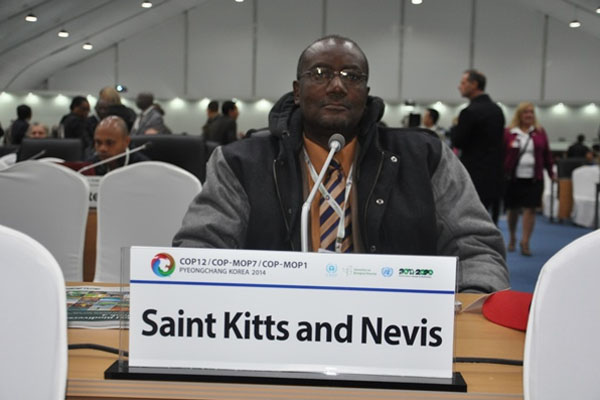 St. Kitts and Nevis in Forefront of Biodiversity Board

Basseterre, St. Kitts (SKNIS) — St. Kitts and Nevis will have a leading voice contributing to the Convention on Biological Diversity (CBD), as the Federation was elected to the CBD Conference of the Parties (COP) Bureau for COP 13 to be held in Mexico in 2016.

Director of Physical Planning and Environment in the Ministry of Sustainable Development, Randolph Edmead recently represented the Federation at the 12th meeting of the COP which was held in the Republic of Korea, where he was elected to represent St. Kitts and Nevis and the Caribbean for the next two years.

“It is indeed an honour to be elected to represent the Federation and the Caribbean,” Edmead said. “For a small country like St. Kitts and Nevis, to be elected to represent not only the English speaking Caribbean but by extension the Latin region of South and Central America demonstrates the Federation’s ability to lead. We may be small, but that doesn’t limit our abilities and capacities.”

Edmead pointed out the importance of Bio Diversity to the Federation.

“Biodiversity simply, is the variation of plants and animals and it focuses on living things and their contribution to nature,” He said. “Biodiversity is indeed very important to St. Kitts and Nevis in terms of economic development, job creation and poverty alleviation.”

The Federation’s recent election to represent the Grouping of Latin American and the Caribbean GRULAC proves to be very beneficial to St. Kitts and Nevis as it gives them an inside lane.

“One of the more immediate benefits is that every developing country is given support for one representative at these meetings,” Mr. Edmead stated. “Because St. Kitts and Nevis is now a member of the COP Bureau, we would now technically have a spot for two.

“The participation of developing countries and Small Island Developing States (SIDS) is always a challenge. Being the representative would ensure that whatever information is received from the United Nations Secretariat can be conveyed in a timely manner to parties so that appropriate action can be taken.”

The GRULAC is a non-binding consensus and dialogue group comprising all Latin American and Caribbean countries whose main purpose is to reach consensus on the different topics of the region.

At the recently held two week meeting, the Director mentioned how important it is to St. Kitts and Nevis and SIDS.

“It is the first COP to be convened after the SIDS International Conference in Samoa,” Mr Edmead stated. “A number of items that were discussed with direct relevance to SIDS were welcome. These included Marine and Coastal Biodiversity, Biodiversity and Sustainable Development and Biodiversity and Climate Change.”

Mr. Edmead has been the National focal point for the United Nations Convention on Biological Diversity for over 10 years.